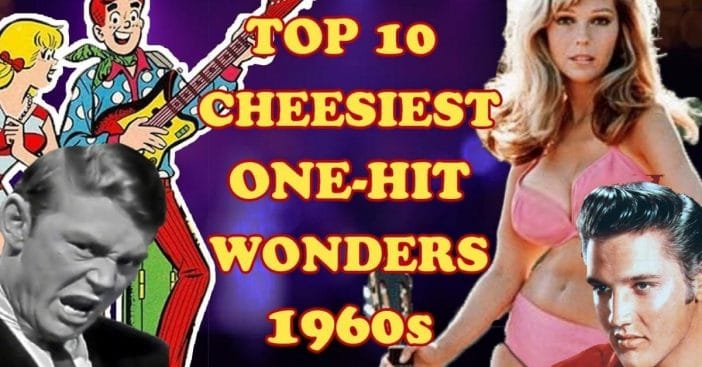 Being a one-hit wonder is both a blessing and a curse. On the one hand, you have a song that soars up the charts and makes you famous. On the other hand, this success doesn’t last, and you could be stuck playing “Disco Duck” for the rest of your career. But even that fate is not totally bad news.

Very few people are going to become Elvis or The Beatles and churn out hit after hit. But maybe, just maybe, you could be the person who writes the next “Macarena” and get your 15 minutes of fame. Let’s go through some of the cheesiest one-hit wonders of the ’60s!

In early 1962, legendary Motown songwriter Berry Gordy wrote “Do You Love Me” for a young and upcoming new group called The Temptations. Berry knew he had a hit on his hands, with the only problem that The Temptations were nowhere to be found! Wanting to record and release his hit as soon as possible, he grabbed fellow Motown group The Contours, who were already in the studio, and the rest is history! The song references numerous dance fads of the ’60s, combining them all into a raucous good time.

RELATED: Some Of The Best Movies To Watch If You Are Nostalgic For The 1960s

“Do You Love Me” flew to #3 on the charts, becoming an instant dance sensation, and the band’s only top ten hit. Although they continued to record music and tour for years, The Contours never achieved this level of success again. However, “Do You Love Me” charted all over again in 1988 after appearing on the Dirty Dancing soundtrack, and continues to appear in movies and TV to this day. Notably, the song appeared in Steven Spielberg’s Tiny Toons introducing another generation to this timeless classic.

In the late 1960s, Norman Greenbaum was a struggling singer with Dr. West’s Medicine Show and Junk Band, a psychedelic jug band that got a big break opening for the legendary Sonny and Cher. So, one day Greenbaum heard a Porter Wagoner gospel song and decided that he wanted to try his hand at writing one. He sat down, and in 15 minutes wrote “Spirit in the Sky,” a smash hit in 1969 that went to #3 on the charts. “Spirit in the Sky” fuses rock and gospel in a way very few songs have.

A fuzzy guitar, gospel backing vocals, and uplifting lyrics of hope and salvation combine to make unique magic no one had ever really heard anything like before. Unfortunately, Greenbaum was unable to replicate this success and by the late 1980s was working as a cook in northern California. But then suddenly there was an explosion of licensing agreements for the song, and to date “Spirit in the Sky” has appeared in over 32 movies, 12 TV shows, and at least 12 national ads. At $10,000 dollars a pop, Greenbaum’s one hit is now set up to comfortably support him for the rest of his life.

When musician Gary Decarlo needed a “B” side for some singles he was recording in 1969, he remembered a song that he had written years earlier with Paul Leka and Dale Frashuer called “Na Na Hey Hey Kiss Him Goodbye,” and re-recorded it. The label asked him what the band was called, he jokingly told them “Steam.” The song, a triumphant breakup ballad, surprisingly went to #1 on the charts, and the three musicians decided to make their made-up band a reality. When a group of session musicians recorded the song “Na Na Hey Hey Kiss Him Goodbye” as a “B” side for singer Gary DeCarlo, they thought nothing much would come of it. The producers asked what their name was, naturally they looked around for something to say and after observing some mist rising from manhole covers outside the surrounding the studio, they came up with: Steam.

Their record company then bought 100,000 of the new singles in order to get airplay on radio stations across the country. The triumphant breakup ballad quickly flew to #1 on the charts, and the group decided to record an album and tour together full time. Talk about putting the horse before the cart! Unfortunately, Steam couldn’t keep their steamy momentum, and never charted another single. But then in 1977, the organist for the Chicago White Sox began to play the song to taunt opponents in the middle of blowout victories, and the tradition quickly spread to every major sport in the US. Who hasn’t sat in the stands and gleefully sung, “na na na na, hey hey hey, goodbye” at their rivals? Because of one mean spirited organist, the legacy of Steam and their number one single will live on forever.

“Monster Mash” might be the only Halloween hit that has stood the test of time. Bobby Pickett was an aspiring actor who occasionally played music to make ends meet. He started doing an impression of famed horror movie actor Boris Karloff during breaks in his set to entertain the crowd, and his friends loved it, encouraging him to do more with the hilarious bit. So he wrote a terrifyingly catchy song about a group of dancing monsters that was sung in his Karloff impression.

Released just before Halloween, the song instantly went to #1, inspiring its own dance and even being banned by the BBC for being “too morbid.” Pickett never had another hit, instead retreading the monster theme, releasing “Monster Holiday,” “Me and my Mummy,” and “Monster Rap” over the years. Although he was never able to recreate his initial success, Pickett’s hit is still with us, as “Monster Mash” still annually charts in the Billboard top 40 on Halloween, and probably will forever.

From the very first note the harmonica riff in “Hey! Baby” is instantly recognizable. The song is a bubblegum pop plea for love that shot instantly to #1 on the charts. Channel had actually written the song several years earlier and had performed it live with famed harmonica player Delbert McClinton. The single’s meteoric rise led to a worldwide tour, where in Europe Channel’s opening act was a little known Liverpudlian group named The Beatles.

John Lennon became obsessed with the harmonica melody in “Hey! Baby,” and pestered McClinton for pointers. This direct influence can be heard on the timeless Beatles classic and first single, “Love Me Do.” Channel continued to make music, and although he had a couple of minor hits, nothing like the stratospheric success of “Hey! Baby.”

Read onto the NEXT page for even more one-hit wonders from the ’60s!