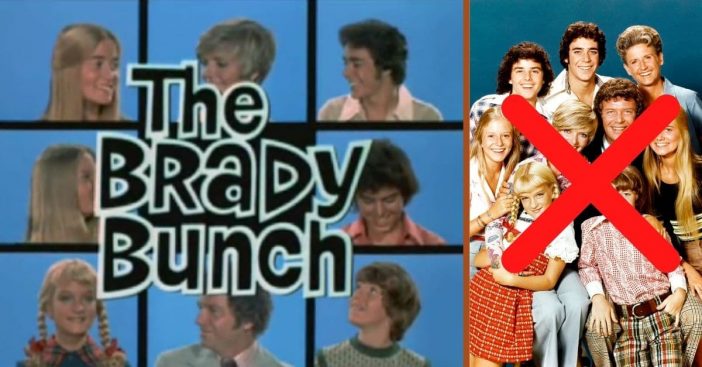 Here’s the story of a lovely lady and a man named Brady, who almost never happened. The Brady Bunch is one of the most beloved and recognizable shows ever to be aired on television, but The Brady Bunch’s success was not a given by any means. In fact, the show seemed doomed for failure before it even began. The pilot was trashed by critics and so was the unlikely first season that followed it. The ratings were nothing to write home about either. When the crew wrapped up shooting the pilot episode, almost everyone on set doubted anything would ever come of it.

The Brady Bunch depicted a reality so perfect many adults found it to be boring, unrealistic, and hokey but behind the scenes, it was anything but. Fighting would take place on set openly and routinely, and secret sex lives threatened the life of the show numerous times. In the isolated universe of the Brady family, there was no Vietnam, there was no JFK, there was no civil rights movement, political assassinations, or protests. Parents never even raised their voices let alone cursed. There were no explosions, there was no violence, there was no sex. The Bradys were the perfect family in a perfect world and this idealized version of family life proved to be a blessing and a curse.

If The Brady Bunch seems hokey and old fashioned to you today, you’d probably just chalk it up to changing values of the times. That’s not really the whole truth though because even back in the early ’70s when the show originally aired, The Brady Brunch seemed dated. Critics trashed it for its Leave It to Beaver ’50s style version of family life. Compared to other prime time sitcoms of the early ’70s like All in the Family, The Brady Bunch seemed to be from a different era. Mr. Brady and Archie Bunker couldn’t be further apart. The prevailing wisdom at the time was that audiences wanted TV to be more real and the Brady’s just weren’t. For this reason, many people including some of the Brady cast themselves thought the show was doomed from the jump.

RELATED: Susan Olsen Remembers Florence Henderson On What Would Have Been Her 86th Birthday

However, there was one aspect of the show that was not squeaky clean and in the late ’60s, still taboo. As the strict social values of the ’50s loosened, divorce was on the rise, but television wasn’t fully on board with this changing social phenomenon quite yet. One day in 1966, Brady Brunch creator, Sherwood Schwartz, came across a little bit of inspiration in the Los Angeles Times. Schwartz read an article that claimed 30 percent of marriages involved children from a previous relationship. Schwartz explained, “In 1966 this was a new phenomenon, Television was loaded with happily married couples, and single widows and widowers, but there wasn’t any show that revolved around the marital amalgamation of two families.” Thus, The Brady Bunch was born… kind of.

Clashing with Lucille Ball’s ‘Yours, Mine, and Ours’ film

The show was originally titled Yours and Mine, and although the major networks showed some interest in the show, they all demanded major changes mostly revolving around the structure of this new kind of family. ABC actually didn’t want Carol and Mike to be married at all. Schwartz held his ground, refused, and the script was shelved. That was until there just happened to be a movie with a similar name and concept that proved to be a massive commercial success.

Yours, Mine, and Ours starred Lucille Ball and Henry Fonda, and like The Brady Brunch, was about a man and woman coming together with children from previous marriages to form a new family. Except in Yours, Mine, and Ours, the mother has 8 children and the father has 10! They tried this out for The Brady Bunch, but there were just too many squares in the intro. Just kidding! Even though the proto-Brady Crunch script Yours and Mine had a similar name, the movie and the future legendary sitcom were completely unrelated. In fact, they both threatened to sue each other. The producers of the movie realized the similarities and threatened a lawsuit. Schwartz threatened to counter-sue because his script was actually first. Facing mutually assured destruction, they all decided to let it be.

The issues with Robert Reed

But there were other problems facing The Brady Bunch. Robert Reed, the famous father of the Brady boys, didn’t even want to be part of the pilot. He was somehow forced to do it out of contractual obligations. Originally, he was told that it would be a realistic show, but when he got the script he was surprised it was as he described “gag after gag.” It was said that he was actually disappointed the show was picked up. According to his co-stars, Robert Reed was a serious classically trained actor and seemed to feel the role of the Brady Bunch patriarch was beneath his artistic prowess.

Barry Williams a.k.a. Greg Brady said that Robert Reed threatened to quit three times the first season and frequently openly argued with the creator of the show, Sherwood Schwarz. Reed thought the writing on the show was terrible and didn’t keep it to himself. He often complained the scripts were juvenile, unrealistic, and full of factual errors. He once walked off the set because the script contained a mistake about the population of the city of Poughkeepsie.

This feud would last throughout the lifespan of the show. In one episode, Carol Brady and Alice, the family’s housekeeper, hold a competition to see who can make the best strawberry preserves. During the scene, Papa Brady arrives home and is supposed to say that the house smelled like strawberry heaven. But Reed, who researched and meticulously fact-checked every script, discovered that according to Encyclopedia Britannica, strawberries give off no discernable scent when cooked. So naturally, he refused to say the line.

Schwartz, the shows creator, and executive producer took Reed to the kitchen where the strawberries were actually being cooked to prove that cooking strawberries did indeed have a smell but Robert refused to budge. They eventually compromised and in the episode, Mike Brady arrives home and says, “I do believe I’ve died and gone to strawberry heaven.”

Written out of the finale as a result

What’s more, Robert Reed was actually written out of the finale. This episode centered around Bobby selling miracle hair tonic. Robert thought this episode was so stupid that, again, he refused to say his lines. This time Shwartz was not so accommodating. He responded by writing him out of the episode entirely but Robert Reed refused to leave the set. He was almost escorted off the set by security, but Schwartz didn’t want the kids to be subjected to such a traumatic scene, so apparently Robert just sat there angrily, the whole time, just stewing. What a way to end a season.

Another issue that threatened the show, again revolving mostly around Robert Reed, was the chemistry between the lead roles, Mike and Carol Brady. There was none, and it was obvious. Florence Henderson aka The Brady Bunch mother realized her co-star was very nervous about the affectionate scenes between them the very first time they worked together in the pilot episode. Unlike other sitcoms, the Brady’s actually openly showed affection towards each other. Their love life was actually the most sexual part of the show.  But before the show was even picked up Florence realized that Reed was… as she put it… “not straight.”

The exposure of Reed’s sexuality could have been extremely bad for the show, and his career

Although he never spoke to anybody on set, ever, about his sexuality, Florence’s intuition was spot on. She asked Schwartz not to press him on the love scenes and to let her handle it, but on-screen chemistry was not the only problem with this … situation. Although being different is always a struggle, even today, in the early ’70s, even in Hollywood, this was not to be spoken of at all. If Reeds’ sexuality was found out about by the press, the show most certainly would never have been picked up and Reed’s impressive career would have likely ended there as well.

Despite all of it, ‘The Brady Bunch’ was a massive hit

Well, despite all of this, the show took off. By the third season, it was an undeniable phenomenon. And even though the show was canceled in its fifth season, the show made an impact on America and the world, few other shows can compete with. The Brady Bunch spawned TV spinoffs, musical albums, movies, merchandise, and generations of fans. And it almost never even happened. I don’t know about you but we’re thankful ABC picked up the pilot and the show went on for as long as it did. Who was your favorite Brady, or are you more of a Partridge Family person? Let us know in the comments!

Click for next Article
Previous article: How The Quarantine Changed Brooke Shields’ Outlook On Life
Next Post: What Happened When Bob Dylan Got The Beatles High