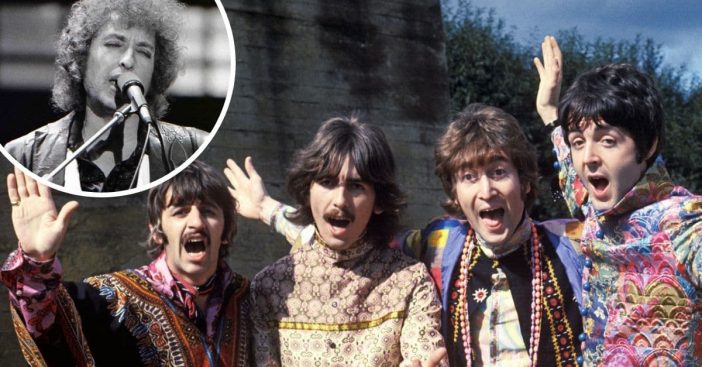 Turns out that Bob Dylan was the one to give The Beatles their first mind-blowing high. They admitted that they tried smoking marijuana before but just weren’t that into it. Apparently, Bob had some way better stuff. The meeting in question happened in New York City at the Delmonico Hotel in 1964.

At first, Bob was reportedly confused when the group said they didn’t really dabble in drugs. He thought their song “I Wanna Hold Your Hand” had the lyrics, “When I touch you, I get high…” but the words are actually, “I can’t hide.” Oops.

When talking about getting high with Bob, John Lennon said, “I don’t remember much what we talked about. We were smoking dope, drinking wine and generally being rock ‘n’ rollers and having a laugh, you know, and surrealism. It was party time.”

Paul McCartney, however, said, “I’d been going through this thing of levels, during the evening. And at each level I’d meet all these people again. ‘Ha ha ha! It’s you!’ And then I’d metamorphose on to another level.”

After having that crazy experience with Bob, they began to smoke weed more and more. As the years went on, many of their popular hits were influenced by drugs. Paul once admitted, “Sgt. Pepper was a drug album.”

The Beatles soon became advocates for weed, which may have never happened without Bob Dylan. Once they even took out an ad calling the government to put more research into marijuana and make it more legal!

Click for next Article
Previous article: This Is Why ‘The Brady Bunch’ Almost Never Happened
Next Post: The Secret, Wild Sex Life Of ‘Batman’s Adam West We Never Knew About