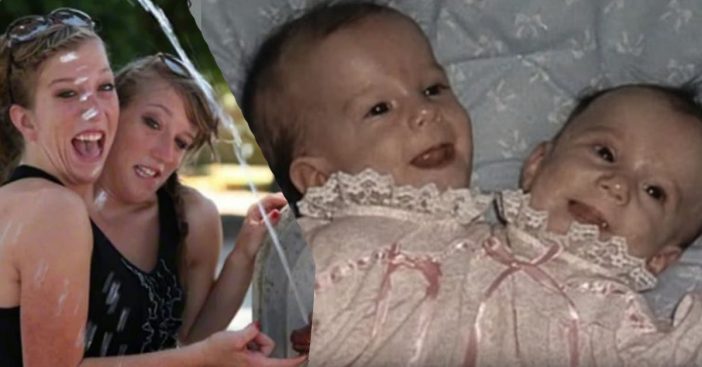 31 years ago, Abby and Brittany Hensel first captivated the world with their unique story. Born conjoined, the twins might have been separated at birth, but at the risk of one of their lives. As a result, they literally grew up together. But they both have different paths they’ve actively been pursuing in recent years.

They talked with curious fans about their current life, exploring topics of romance, careers, marriage, and building individual families of their own. All the while, they also stay in touch with doctors for their health. March 7, 1990 marks the date of their birth, and there has been much to celebrate since.

When last fans heard from Abby and Brittany Hensel…

Both have a passion for education. This is one of the few personality overlaps they share; despite being conjoined, they are very different from one another. Both Abby and Brittany Hensel got jobs as fifth-grade teachers. They each teach different subjects as different teachers for different classes. However, they receive one single shared paycheck.

RELATED: The World’s Oldest Conjoined Twins, Ronnie And Donnie Galyon, Have Died At 68

Years ago, they endured this situation quietly. However, with more experience under their belt, they decided to push for separate salaries for their separate work. Distractify reports, “In 2018, Abby and Brittany revealed that the school that hired them offered them two contracts. Since they were working part-time, they weren’t receiving a full salary. Their compensation was split in two, meaning Abby and Brittany each got half.” Abby and Brittany bring separate degrees in math and English from Bethel University, which makes them further uniquely qualified at an individual level, so the decision makes sense.

What are their plans for romance?

Despite being conjoined, Abby and Brittany Hensel fully want to build separate love lives, enjoy different dates, get married, and maybe have kids of their own. To an extent, that also entails a life outside of the public’s eye. They participated in a TLC series to educate viewers about their lives and normalize the appearance of conjoined twins. Now, however, they are more private, with their last Instagram post from some five years ago.

However, they did share their goals beyond educational careers. This area might bring them some complications. In 2012, a rumor circulated stating Brittany was engaged. The girls dismissed it and did not elaborate further. While they guard their private lives, they also must guard their health. Their lives must involve trips to medical professionals, consultants, surgeons, and neurologists. Visits like these ensure they’re both staying healthy.

Staying vague about the more personal details of their lives, Abby and Brittany participated in an interview to explain their dreams of romance on their own terms, not what rumors try to dictate. Each twin hopes to find a prince charming of her own, echoing and stressing the fact that they are “totally different people.” The closest to specific plans they shared came from Abby, who elaborated, “Yeah, we are going to be moms one day, but we don’t want to talk about how it’s going to work yet.”

In the meantime, love might not be in the air, but music is. The two nurture their love for playing piano together, with Abby in charge of high notes and Brittany in charge of lower keys. They’re very active outside, too, loving the thrill of traveling, though of course that also means answering personal questions.

Back to the beginning

Patty and Mike Hensel were shocked when their daughters were born. Initially, they anticipated giving birth to one child. However, that day at the hospital, they actually gave birth to a very special set of twins. Abby and Brittany Hensel were born conjoined at the torso, with their own separate heads, necks, and spines. Immediately, the couple knew their daughters might have a difficult time navigating life. They rejected proposals for a separation. Some parents pursue separation with great success, but in this case, the risk was too great that one daughter would perish. Instead, the couple showered their twin daughters with love and attentive care.

Today, the support of their parents and their own persistence saw Abby and Brittany Hensel to happy careers and daily lives. Though they work hard to coordinate with one another, they still enjoy activities anyone else does. The lives they live are unique, but not only because they are conjoined twins. Rather, their lives bear that same unique spark of individuality every person possesses. Because of this, they are especially suited to their impactful careers.

Growing up took coordination and education

Abby and Brittany Hensel learned together what worked and what did not. Simple traits made a world of difference and still do for the twins. For example, Abby is taller than Brittany. In fact, Abby’s spine needed operating on so it would stop growing after Brittany’s had stopped. This means Brittany must compensate when walking.

Each twin controls one half of the body. Actions require much careful coordination, and it has been a learning process. They share everything from the pelvic area down. Upon their birth, there used to be an arm between them. Feeling this could be safely eliminated, doctors removed it. Such a procedure is one of the many surgeries they endured throughout their lives.

Learning about the twins’ lives offers an exploration on nature vs. nurture. Each girl has her own unique preferences and hobbies. Brittany fell ill more often than Abby. Bouts of intense illness prompted Abby to complain about needing to stick around during the recovery process. Though it is easier for them to eat at the same time, their tastes are very different as well.

Their academic interests differ as well. Abby enjoys mathematics while Brittany prefers English studies. All their legal documents reflect their individuality. They have their own birth certificates, drivers licenses, and passports. Obtaining their driver’s licenses was a feat of coordination. Their instructor was considerate and learned much himself. Understanding which eyes processed part of the road took adjusting. Additionally, they had to take the test twice, according to Tuko. Once for Abby and once for Brittany.

The best teachers are skillful learners

Abby and Brittany Hensel learned a lot through life. To an extent, they still do. Many people are curious about their lives, but to fully enjoy it Abby and Brittany are selective about what they share. What they eagerly share, however, is wisdom. Time and again shows siblings have a very special bond, and the Hensel sisters further prove this with their consideration and determination.

The twins work as fifth-grade teachers in Minnesota, guiding the next generation down a path of knowledge. Each twin earned this position after nailing the job interview and leaving little room to consider refusing them. Principal Good recalled escorting them out after the interview then, “Before I even sat down one of the people said, ‘Run after them, hire them, give them the job.’”

They entered the job knowing children might have questions or comments about their respective instructors. So, according to Living101, each first day of class includes an open forum where their students can ask questions and the twins may clear the air. In this way, everyone can focus on the goal of each lesson from then on out without feeling distracted.

Returning to the subject of their pay as teachers, Brittany felt they were justified for pushing for more: “One can be teaching and one can be monitoring and answering questions. So in that sense, we can do more than one person.”