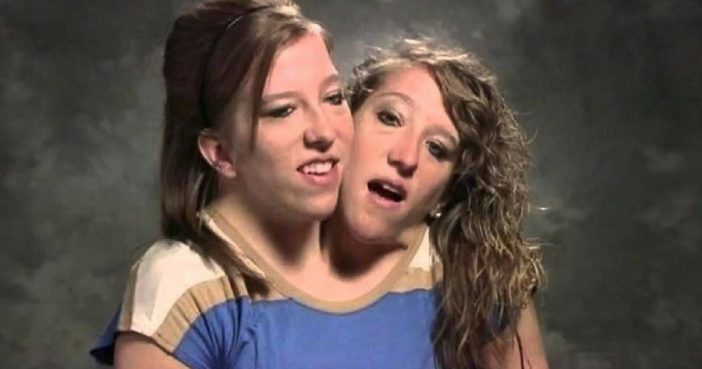 Abigail Loraine “Abby” Hensel and Brittany Lee Hensel (born March 7, 1990) are American dicephalic parapagus twins, meaning, they are conjoined twins each of who has a separate head, but whose bodies are joined. Being that their bodies are highly symmetric, they give the appearance of having one body with typically normal proportions. Each twin controls her half of their body, each operating one arm and one leg.

As infants, the initial learning of physical processes that required bodily coordination, such as clapping, crawling, and walking, required the cooperation of both twins.

These extraordinary conjoined twins defied the odds. At birth, doctors told their parents they wouldn’t live more than a few hours. Now 28 years later they are miraculously full grown adults. They made headlines when they were born and today are still making major headway in their lives. They have learned to tolerate one another—working together as two individuals, but as one body. They share the same world spending all their days together—living a unique life as conjoined twins.

While they can eat and write separately and simultaneously, activities such as running and swimming require them to coordinate and alternate their actions symmetrically. Other activities as diverse as brushing hair and driving a car require each twin to perform separate actions that coordinate with the other’s.

Upon their birth, the twins’ parents decided not to attempt surgical separation after hearing from doctors that it was not likely that both would survive the operation. As they grew and learned to walk and develop other skills, their parents confirmed their decision against separation, arguing that the quality of life for the surviving twin or twins living separately would be less than their quality of life as conjoined people.

At birth, doctors told their parents they wouldn’t live for more than a few hours—miraculously they are now full-grown adults today.

For their entire lives—from the time they were infants, through childhood, through the difficult teen years, and through to today—the twins have had to struggle to overcome many challenges. Now at the age of 28, Abby and Brittany are sharing the next chapter of their lives. They plan on teaching at the Mounds View Elementary School.

One in a trillion: The Hensels are believed to be one of only a very few sets of dicephalus twins in history who have survived infancy.

The young ladies are shown graduating from Bethel University in Minnesota in the first episode of their reality show.

The girls first drew the attention of mainstream media in 1996 when they appeared on The Oprah Winfrey Show and were featured on the cover of Life Magazine. Afterward, they lived a quiet life with their family in Minnesota. They kept out of the media spotlight, busying themselves with family, relationships, and their own personal affairs. They then agreed to appear in a documentary for TLC when they turned 16.

The broadcaster gave them their own show, called “Abby and Brittany,” which premiered on Aug. 28, 2012.

On their 16th birthday, Abigail and Brittany passed their driving test, with a mind-boggling feat of teamwork.