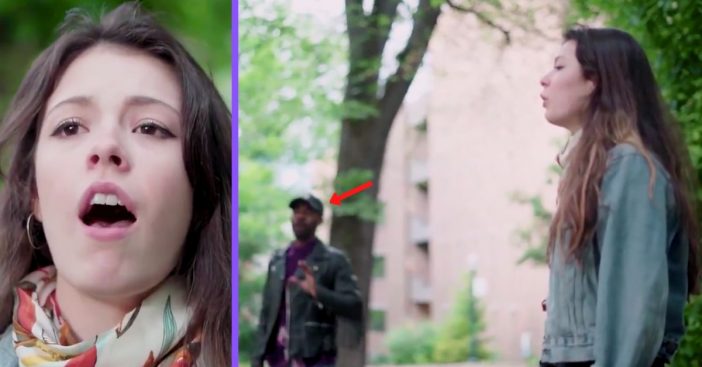 He asked if he could join in and they all thought, “why not?” What happened after that was true unity at its best, which is what our country needs right now more than ever. This man chimed in, standing at a distance with perfect harmonies that matched the student’s melody.

College grad and complete stranger combine their voices in unity

In the video, we learn that the student is Madisen Hallberg and the stranger who joins her is Emmanuel Henreid. Emmanuel is actually a classically trained singer, dancer, actor, and pianist. This explains why his heart-melting vocals paired so perfectly with Madisen’s. He sings for the Portland Opera Company, Maui Opera Company, St. Mary’s Cathedral, Gospel Choir: Kingdom Sound, and also teaches students worldwide.

RELATED: Jimi Hendrix Discusses Why He Played The National Anthem At Woodstock

How the Internet is reacting

At the end of the video, Emmanuel seems to wave to Madisen and leave. But, it looks like the university was able to get his information afterward. It was such a beautiful and unifying moment captured on film in part with so much gifted talent that the world deserves to know who they are!

People have been sharing their comments on the video since it was posted. “This wins today’s internet. Nothing can even come close. Beautiful. Just beautiful,” one Twitter user says. Another adds, “I love that they talk about singing as one voice and each not trying to out sing the other. “Make sure you listen louder than you speak” This is such a lovely, honest, and powerful moment. Thank you all for sharing.” They reference an interview that the two did together following the positive support they received on the original video.

“Sliced onions warning. Whew. Beautiful,” one person says. And they are so right! This performance will get the waterworks going for anyone who loves their country. Check out the full video below.

A @Portland_State University grad student was recording the national anthem for their online graduation.

A stranger walked by and heard her. This is what happened:

Click for next Article
Previous article: Lisa Rinna Puts Down Fans Who Are Trying To Get Her Fired From QVC
Next Post: Strangers Buy Ice Cream Vendor’s Entire Stock, Raise $40k To Help Him Retire