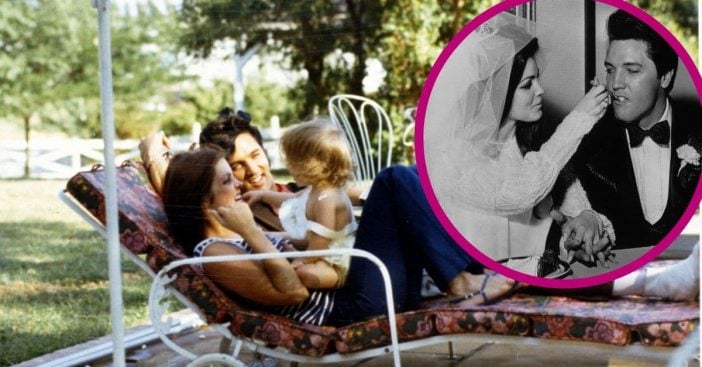 Strong, enduring couples offer welcome reminders that romance can last. They also show that two people can, in addition to being in love, also be each other’s best friend. These ten pictures of Priscilla and Elvis Presley certainly show that. Love is palpable in every photo, which captures and immortalizes their strength together.

The circumstances behind their meeting and relationship are unusual. That unusual quality stems from Elvis Presley’s preferred company, which often consisted of younger women. Those who knew the King of Rock and Roll feel that was because Elvis was something of “a perpetual youth.” Not every relationship is flawless and the one between Elvis and Priscilla is no different. But these pictures help rightfully commemorate what was worth treasuring.

Pictures of Priscilla and Elvis show their journey

Not only do these pictures of Elvis and Priscilla Presley show their closeness, they also document the couple’s journey. It all began in Germany. Elvis was drafted into the military by 1958, then stationed in Germany.

By this point, Elvis already had fame as a singer around the world. But that’s precisely one of the reasons why Priscilla’s parents did not like the idea of them seeing each other. The age difference contributed too.

Determination can make anything possible

Eventually, Elvis returned to the states. There, he engaged in other relationships. Both events put Priscilla through a great deal of distress. Her parents adamantly did not want her seeing Presley and his manager did not want fans to know the King was in a committed relationship.

But Priscilla had her mind made up. By the time she was 18, she was heading to the U.S. to reunite with who she saw as the love of her life. The feelings appeared mutual, and most pictures of Priscilla and Elvis Presley show nothing but smiles after that.

Their wedding became one of their happiest days

Their smiles say a lot. This also comes after a tumultuous bump in the road that took the form of Ann-Margret. She was sometimes called the “female Elvis,” but that did not make her pleasant to poor Priscilla. She and Elvis co-starred together and Priscilla had to endure reports of feelings blossoming strongly between the two.

Again, she fought and fought to reestablish her place in his life. Things did not stay pretty constantly but eventually Ann-Margret became irrelevant one Christmas when Elvis proposed.

Capture a look between Priscilla and Elvis Presley for all time

Some looks can be fleeting, but the right picture can immortalize the most elusive, precious moment forever. For this evening of their wedding, there was no Ann-Margret, just these two with eyes only for each other.

After the wedding fun, the couple immediately engaged in a press conference to announce the joyful news. Presley was no longer a bachelor and did not embrace that persona.

Every couple needs some fun

Pictures of the wedding represent an important time. Though they had eyes only for each other that night, Elvis did become immersed in rumors of extramarital affairs.

He wasn’t the only one. Rumors also circulated that Priscilla was doing the same. Though, hers were limited to after they actually got married, not just before like his. Some of their actions are attributed to their maturity. She was physically young and he embraced a young, immature mindset at times. After their marriage ended, Priscilla often reflected with her more mature understanding.

Elvis, Priscilla, and one more complete the picture

Deep down, Elvis and Priscilla did have enough sweet moments for a whole compilation of tender pictures. Things did become rocky and deteriorate, of course. Otherwise, they would not have divorced. But they were not without a lot of sweet moments.

One such example comes whenever they fuss over little Lisa Marie Presley. Look at Elvis’ expression. He looks like he won the lottery, the proudest man in the world. All the while, Priscilla shows unending love for the daughter they became blessed with.

They even had to share their joy with others

Becoming the King of Rock and Roll and his successful wife comes with a lot of publicity. Some celebrities determinedly cling to any sense of privacy they can. Others embrace the limelight fully. When it came to showing their love for Lisa Marie, these two had to share it with others.

Indeed, fatherhood helped temper some of Elvis’ negative habits. He is just one more example of that belief coming true.

The birth of Lisa Marie reinvigorated Elvis. She helped refocus him so he would show all the love he had in his heart. That meant becoming a functional team with his wife again. And when the two united, the results are achingly affectionate.

The above picture of Elvis, Priscilla, and Lisa Marie Presley show what a family’s love can amount to. It shows a soft moment and leads into the mention of the grander gestures Elvis went to so he could prove his love. One example involves flying her on a private jet to let her see the snow. Some people bring out the best in others and can, for a time, remind them of their best qualities to those they love, however shakily.

Indeed, though his interpersonal relationships could be tumultuous – both within and outside of the family he built with Priscilla – many of the people who knew Presley agree: he cared a lot. Linda Thompson would say that generosity was as easy as breathing for the King, and certainly his Memphis Mafia wanted for nothing at Graceland. What do you think were Presley’s true colors? Scandalous? Flighty? Compassionate? Or some combination?

Do you know all the women Elvis was involved with?? It’s quite the list, see more in our DYR Video!

Click for next Article
Previous article: Ted Shackelford, 75, Has A Special Place In His Heart For Gary Ewing All These Years Later
Next Post: ‘All in the Family’: By Season 2, Rob Reiner Had Had Enough of Mike Stivic and Wanted Off the Show