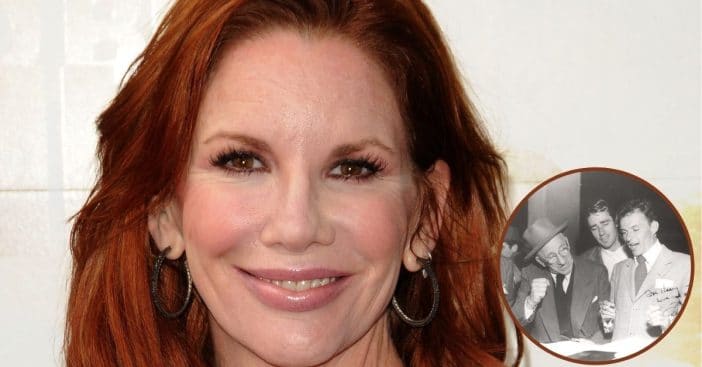 Melissa Gilbert, best known for starring in Little House on the Prairie, recently shared a photo of her grandfather with the legendary Frank Sinatra. Alongside her grandfather, Harry Crane and Sinatra, include Peter Lawford and Jimmy Durante. ““Frankie” signed this picture for my grandfather. Many many years later I went to see him in concert with Liza and Sammy,” Gilbert writes.

She continues her story, recalling that she was able to get backstage at the concert, where she was able to meet Sinatra… but he didn’t know who she was at first. “I sheepishly said, “Mr Sinatra, I believe you know my grandfather.” He eyed me suspiciously, like ‘sure, kid…’and said (with a slight eye roll) ,” who’s your grandfather . “ Harry Crane.” I whispered back. “Hesh?…HESH?!?!!!” He exclaimed.”

“Then he turned around to everyone and said “Hey everyone! Look at this! This is Hesh’s grandkid! Get this kid a drink!” One of the all-time best nights ever.” Can you imagine getting in the inner circle with Frank Sinatra?!

All those people in the photo have made their own, personal mark in the entertainment business. Durante was a vaudeville comedian known for witty singing and butchering the English language, and may also be known by many as the singer behind the Christmas classic song “Frosty the Snowman.” Lawford was also part of the famous Rat Pack alongside Sinatra, Dean Martin, Sammy Davis, Jr., and many others for some time. Then, of course, there’s Sinatra—one of the most-remembered crooners in history and one of the most recognizable members of the Rat Pack.

Crane, however, was a comedy writer who helped to create the concept for The Honeymooners. He also wrote—yes, wrote—for the Academy Awards in 1957 and 1959; the Golden Globes in 1968; and the Emmy Awards in 1968, 1971, 1973, and 1974. Now, that’s a pretty cool accomplishment. And, of course, his granddaughter would go on to star in one of the most-remembered and beloved shows of all time.