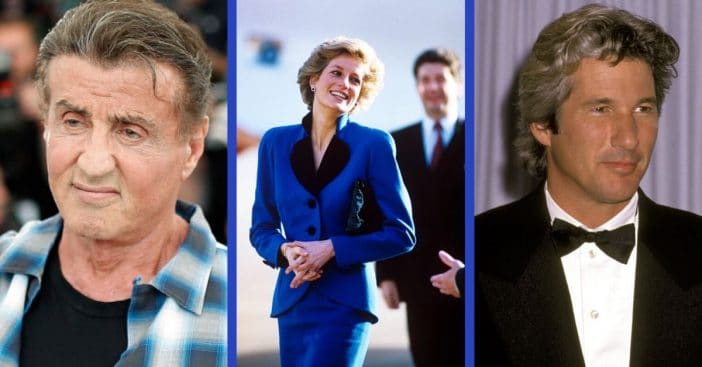 Many famous names cross paths quite often. But it only takes one chance meeting to create a very memorable scene. Even without being directly involved, onlookers can’t help but notice and remember when such wild events happen. Elton John recently composed a memoir of his very eventful life. But one of his biggest stories actually involved three other people. At one of his parties, he witnessed Richard Gere and Sylvester Stallone fighting over Princess Diana, though Stallone denies such an event occurred.

News of this potential scuffle comes from an excerpt of the memoir published by the Daily Mail. The memoir, titled Me, tells of Elton John’s very eventful life thus far. In it, he crosses paths with musical fame and sparkling royalty alike. Inevitably, all those colorful personalities ended up mixing together and before anyone knew it, two bulls allegedly locked horns over Princess Diana.

Here, “situation” means Sylvester Stallone and Richard Gere starting a confrontation over Princess Diana. The night began routinely enough for a big dinner party hosted by Elton John. In the sample from his memoir, John recalls British and entertainment royalty alike attending. Not only did the party include a special guest list but it occurred at a special time. By then, Princess Diana was separated from Charles. meanwhile, John writes, “Richard had broken up with Cindy Crawford. They ended up sitting in front of the fireplace together, locked in rapt conversation.”

The spark was immediate. While the duo chatted happily, however, John noticed Stallone looking decidedly less happy about the situation. He recalls, “I think he may have turned up to the party with the express intention of picking Diana up, only to find his plans for the evening ruined” as he saw them hit it off so well. Everyone shuffled around a bit when it came time for dinner, but all that movement and distraction actually gave time for new events to unfold. When John couldn’t find Stallone or Gere, he asked David Furnish to locate them. Furnish came back with the words “We have…a situation.”

Sylvester Stallone and Richard Gere got ready to rumble

Stallone seemed ready to unleash his inner Rocky when Furnish came across him and Richard Gere in the hallway. Looking back on the evening, John recounts it as, “It transpired that he’d discovered Sylvester Stallone and Richard Gere in the corridor, squaring up to each other, apparently about to settle their differences over Diana by having a fist-fight.”

Since this story began circulating, Stallone vehemently denied the event occurred. US Magazine reports that a fan asked Stallone about it when replying to an Instagram post. MSN specifies the post as being from Wednesday, October 30, 2019. Stallone replied, “Total BS for him to sell books. Total rubbish.”

Click for next Article
Previous article: Man Sets Out On Secret Search For Wife’s Lost Wedding Ring — And He Finds It!
Next Post: Convert Your Old Tire Rims Into The Perfect Unique Fire Pit