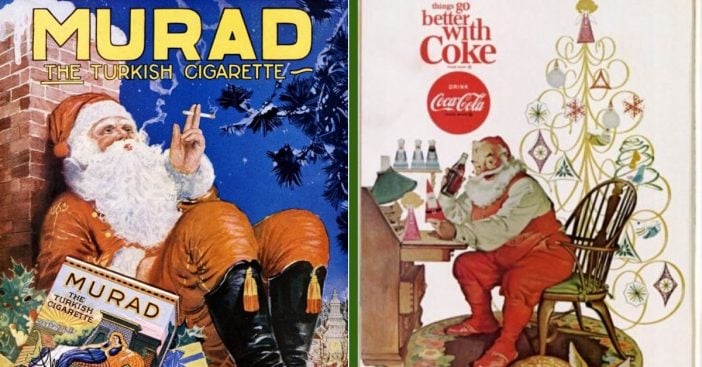 St. Nick began appearing in Christmas ads as early as the 1840s, but it wasn’t until 1963 when cartoonist Thomas Nast would create what we now know today as Santa Claus! Once the big, white beard and red suit became a holiday staple during this time of year, it was the best way to market items and other things to the public.

This would start on the commercialization of Christmas since now every single commercial on TV is a holiday-themed advertisement. However, the vintage Christmas ads from the ’50s, ’60s, and ’70s are certainly as charming as they are nostalgic. Do you remember any of them?

Santa enjoys a nice cigarette break from his annual deliveries

This advertisement actually started showing up in Country Life in the 1920s. He was a Murad favorite even before World War I!

RELATED: You Can Buy Ceramic Christmas Trees For $25 At Aldi

We all have seen the legendary Santa and Coca-Cola crossovers throughout the years. This one, in particular, came to life in 1954 by illustrator Haddon Sundblom.

Cozy up with a good book

In the 1972 issue of Better Homes & Gardens, Santa cozies up with the Life Savers Sweet Story Book. There’s even a coupon attached to this advertisement, but it’s probably expired by now!

What a blast from the past! Way back before they called ketchup what we know it to be today, Del Monte called it “tomato catsup.” This advertisement for it dates back to 1962. Santa sure fits in well with the red color scheme!

Read onto the NEXT page for more nostalgia-inducing Christmas/Santa ads!