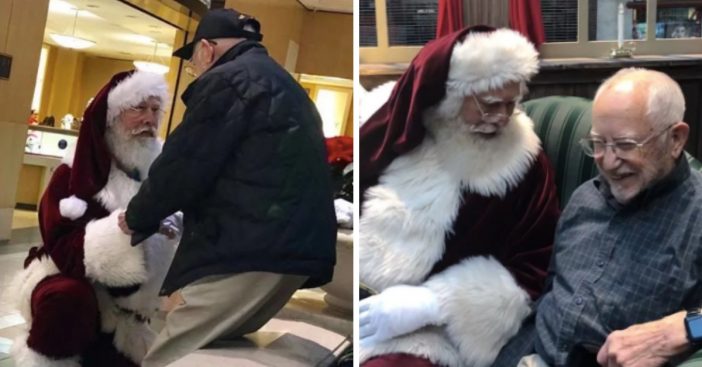 On December 1st, a mall Santa Claus pleasantly shocked everyone nearby as he knelt before a World War II veteran and thanked him for his services. Gina Wilbur was at Concord Mall in Delaware when she saw the encounter take place and couldn’t help but pull out her phone to snap a photo of the precious moment.

“Just as I was ready to take the picture, Santa stopped short to shake the hand of a gentleman, a WWII Veteran, sitting on a wall next to me. As Santa reached for his hand, the gentleman began to stand and then Santa knelt down on one knee to show his appreciation,” says Wilbur in an email to PEOPLE.

Wilbur recalls that during the encounter, Santa sat with the veteran and spoke of old friends he knew that had enlisted in the military as well.

“He spoke in a soft voice, thanking him for his service and spoke of others he knew who had served. Then he stood up and went back to his chair to greet the children,” Wilbur confirms.

Wilbur had posted the photos and of the experience on her Facebook page, and received much more attention than she had planned! Her intention was to find out who the WWII veteran was that Santa had connected so closely with.

“Others were commenting of heartwarming stories about Santa and how he impacted them; always greeting and respecting veterans, signing to deaf children and holding the sleeping babies,” Wilbur says of the mall Santa. After the vet’s daughter reached out over Facebook, Wilbur discovered that the veteran was 93-year-old Bob Smiley who served under General George S. Patton.

After the photo received a certain amount of attention and went viral, the three met up at the mall once more for a photo. “We owe a debt of gratitude to men like this, that have made such a life-changing decision to give up themselves, be willing to lay down their life even, for other people,” the mall Santa told Fox 29.

Wilbur hopes that this picture will help serve as a reminder of seeing the good in one another his holiday season. “This picture is no longer just and image but a photograph that came to life. It goes so much deeper because of those two men,” Wilbur explains, “In a world full of so much negativity, I truly think we have to seek the positive. There are genuinely good people all around us, doing great things. It’s all about perspective. We just need to choose to see it and share it.”

Please SHARE this article with your friends and family if you loved this heartwarming Christmas story.

Check out the news coverage on this amazing story below: