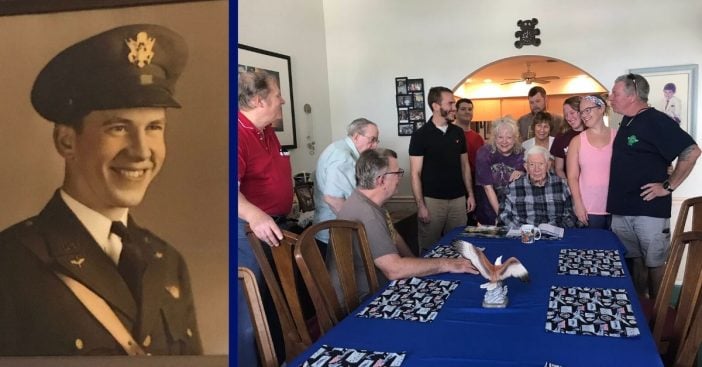 Retired World War II pilot Jack Koser recently celebrated his 100th birthday. Already, Koser has lived a remarkable life with impressive longevity, but his accomplishments do not end there. During his time as a pilot, he flew a history-making 23 missions over the Pacific Theater. Today, he still carries scars from his time in battle; they are invisible, internal, emotional. But on an early December day, he got to take pride in how far he has come – in many ways – by celebrating his birthday and sharing stories of his time during the war.

Born in 1919 in St. Louis, Missouri, Koser readily enlisted in the army as he watched those around him be drafted. Specifically, he enlisted in the Army Air Corps. Over the course of his 24 years with them, Koser learned how much he enjoyed his work there, a feeling the veteran carries today. “I loved the Air Force. I loved flying,” he stated. Remarkably, this was his exact sentiment after trial upon trial befell him; nothing seemed capable of pushing Koser away, only encouraging him to press on. His dedication did not go unnoticed by his peers, and the retired World War II pilot earned five air medals, two distinguished flying crosses, and two unit citations.

Jack Koser served as a B-29 pilot with the 6th Bomb Group, 39th Bomb Squadron, 313th Bombardment Wing of the 20th Air Force. During his time with the Army Air Corps, he was based in Tinian, home to a Boeing B-29 Superfortress bomber. A Superfortress today is just as rare a sight as it was in the 1940s. Koser formed a memorable legacy of his own. He not only piloted a Superfortress but became the only known one to roll the B-29 and survive.

The remarkable feats don’t end there, though. Koser managed to fly back to his base with two of his four engines completely blown. Koser admitted that, of his missions, “Some of them were easy. Some of them were tough.” That mission, in particular, required a lot of careful maneuvering and coordination. “We were flying along and had to drop down to 5,000 feet so that we were at a lower altitude for [a] bailout.”

Nothing could deter Koser from fulfilling his duty, though at a cost

“We got to Iwo Jima and we couldn’t see anything, couldn’t bail anybody out, which was good because I didn’t want to bail out anyway,” Koser said as he recalled his many war stories. Memories remain with him even today, though they are not always so welcome. 23 missions against the Axis left him able to feel like these events occurred yesterday. “I could hear the rumblings of war,” he admitted.

Years ago, Koser suffered a stroke that affected his speech. Much like his determination in the skies years ago, Koser persisted through such obstacles to show journalists his awards and articulate the stories behind them. On a mission that left he and his comrades without a radio, navigation became particularly difficult. Adding to this was one of the engines being cut due to lack of fuel. Even so, they made it to their destination. For his efforts in that mission, Koser earned one of his Distinguished Flying Crosses.

This year, Koser gets to celebrate a different kind of accomplishment at home in America

Jack Koser, as a retired World War II pilot, has already accomplished much. Koser came to eventually serve as a personal aide to former US President Harry Truman. When he finally retired, he did so as a Colonel. But he still sets goals for himself.

His birthday wish this year? “God willing, I’ll make 102.” For now, his 100th birthday was spent surrounded by family at his home in Bradenton, Florida. With the determination Koser has already displayed, it’s likely 102 will be yet another milestone this pilot whirls right by.