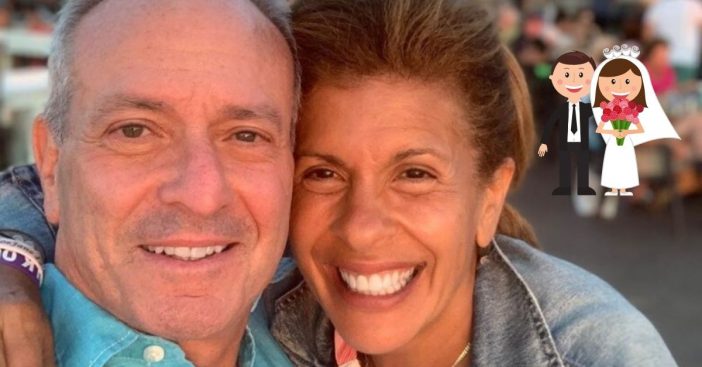 Recently, Hoda Kotb got engaged to her longtime boyfriend Joel Schiffman. She announced the engagement last week on The TODAY Show and now she is talking about wedding plans. Hoda revealed that they want to get married “sooner rather than later.” Likely because they have been together for six years and shared two adopted kids together.

Hoda and Joel got engaged during a tropical vacation and they are thinking they want to get married in the same setting! She said they are thinking about doing a destination wedding but haven’t decided on anything for certain. They also want to make sure they include their daughters in the ceremony.

Joel and Hoda share adopted daughters Haley Joy and Hope Catherine. They shared their wedding plans with their girls. Hoda said, “We said to Haley, ‘Mommy and Daddy love each other so we’re having a party,’ She’s gonna be in it. And Hope, too.”

Next, Hoda’s co-host Jenna Bush Hager suggested putting Hope in a wagon for the ceremony and Hoda thought it was a cute idea!

Last week, while Hoda was announcing the engagement, she shared a story about her stunning engagement ring. Joel actually met with her friend and jeweler Jennifer Miller to create a custom engagement ring for Hoda.

“What touched me so much about this ring is that he thought about it,” Hoda said. “And he thought about what I might like. He went to (Miller) and they were sharing things back and forth unbeknownst to me. He was giving her ideas.”

We can’t wait to learn more about their upcoming wedding plans and eventually see photos of the nuptials! Congrats again to Hoda, Joel, and their children! Watch the full interview below: