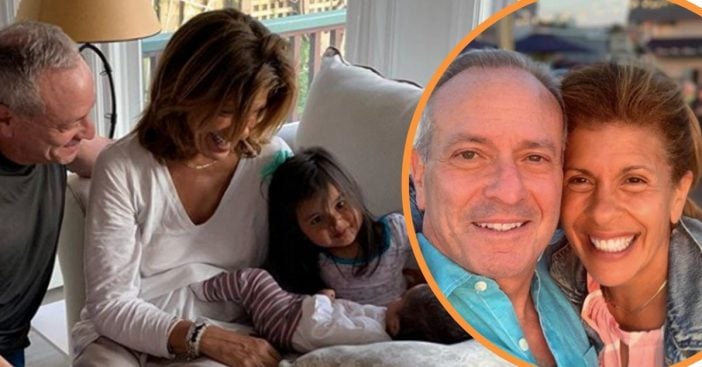 Hoda Kotb of the Today Show recently opened up about the time her partner Joel Schiffman told her “I love you” for the first time. No matter who you are, it’s always such a special moment in a relationship! The two have been together since 2013.

“He was the first person to say ‘I love you,’ and I remember him saying it to me,” Hoda recalls on TODAY with Hoda & Jenna. “And after he said it, I remember just sitting there because I wanted to feel it for a minute.” Aww!

The moment when Joel Schiffman tells Hoda Kotb “I Love You”

Hoda continues, “Like, just to sit with that for a minute — somebody saying, you know, he just said, ‘I love you,’” she says. “And I paused, and he goes, ‘Don’t leave me hanging out here in the abyss,’” she adds jokingly. Hoda also says that Joel saying just those three words alone was an “act of courage” to put himself out there like that. It’s never easy to be the first one to say it!

“He goes, ‘Please,’ and I told him I loved him, too, but I remember thinking to be the first person to say it is risky and that takes guts,” Hoda says. “And it’s easy to be the one who says, ‘I love you, too,’ and I will always admire him because he has guts.”

The two have an obviously strong and happy relationship

She says that when he told her he loved her, she knew at that moment that she truly did love him, too. But, she did need time to process the enormity of it all! “Sometimes, you want a moment to wash over you. I think a lot of moments were, like, he said it, I say it, ‘cause I’m a pleaser,” she says.

“So I’m, like, I don’t want him to feel bad, but in that moment I just wanted to …,”  Hoda says without finishing her thought. It’s safe to say this relationship is a strong one! The couple has also adopted two daughters in the time-span of 6 years.

Will they ever marry?

Will Hoda and Joel ever get married? Or will they end up like Goldie Hawn and Kurt Russell, famously unmarried for over 30 years? Check out the video below! (Either way, we’re so happy to Hoda and Joel’s happy relationship and wish them many more happy years together!)