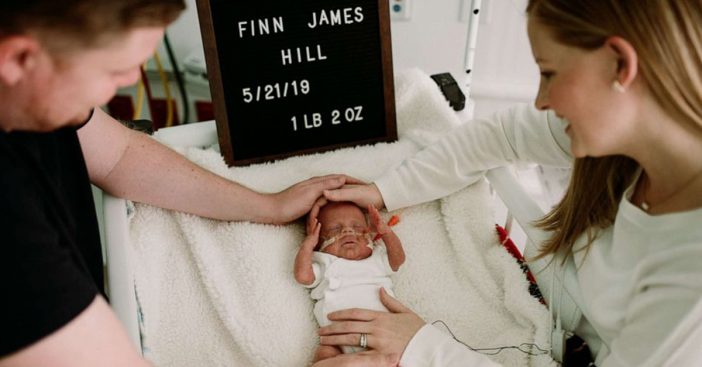 A Florida couple has just welcomed home their son, who spent almost four months in the NICU after he was born weighing in at just 1 lb. Jessica and Christopher Hill’s son Finn James was born at 24 weeks, well before full-term. Doctors allegedly tell the new parents that there is a 50% chance Finn would survive. Now, Finn has proved all of them wrong!

He would spend the first few months of his life on a ventilator in the NICU. Finn also went under surgery to repair a hole in his heart and to correct an illness in his intestines.

The newborn is in the NICU for nearly 4 whole months

The newborn was transferred from Lakeland Regional Medical Center to the NICU at Nemours Children’s Hospital in Orlando on June 6th. He remains there until doctors give the new parents the OK to bring the baby home once and for all on September 10th!

New mom Jessica says, “It didn’t hit me until we left and it was the three of us for the first time. I knew we wouldn’t have to take him back. It was everything we hoped and prayed for.”

The birth of their son was a big deal for the new parents. They had sadly struggled with infertility for a long time and even failed IVF cycles for 9 years straight. It’s been tough for them to successfully conceive. They soon opted for adopting 8 embryos from a couple Jessica met on Facebook. After one unsuccessful pregnancy, she soon became pregnant with twins.

“They have given us the gift of life,” Christopher says of the couple who gave them the embryos. “That’s the biggest thing you can give someone, is the gift of life.” Sadly, one of the twins died at 10 weeks, and Finn soon came at 24 weeks as the 1-lb preemie. A blood clot caused Jessica’s water to break prematurely.

The first time Jessica gets to hold her newborn son

“Initially, it was just shock. I started crying and asking my doctor, ‘What are his chances of survival if you take him out now?’ ” Jessica recalls after Finn is born. “The doctor said he was safer on the outside than he was inside.”

Jessica is finally able to hold her son for the first time on June 30th. He was delivered by emergency cesarean section. Jessica calls the moment she’s able to hold her son “unbelievable” as she’s had to watch him from afar for more than a month. “When his entire hand fits around your fingernail, it makes you realize just how precious life is,” Jessica says.

Finn is now 4 months old and weighing in at 5 lbs 5 oz. Jessica and Christopher are tracking their newborn son’s progress on his Facebook page called Fighting Finn. We are working hard to make sure his glucose levels don’t drop and he eats enough to gain weight…. It’s a bit of a battle, but we are hopefully getting there. We would hate for this peanut to be re-admitted,” the most recent update says.

We’re very confident that Finn is going to pull through and end up becoming super healthy after being in the NICU for so long. Especially with these two loving parents! The couple says they hope to give Finn a sibling using the remaining embryos from the couple they met on Facebook, who they now consider close friends.

Millennials Aren’t Doing This Nighttime Routine With Their Babies, But Science Says They Should.