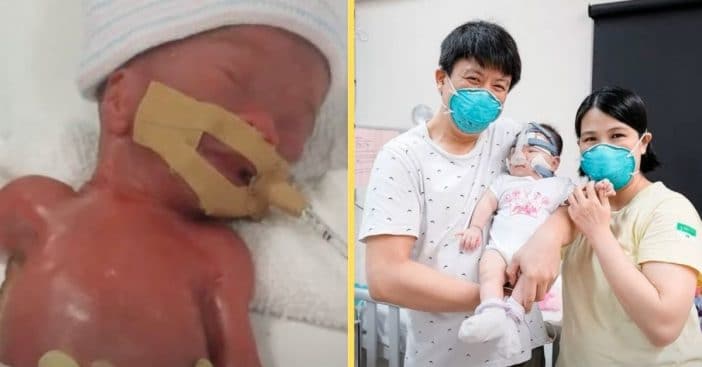 A baby who was thought to be the smallest baby ever at birth is finally home after spending 13 months in the hospital. Kwek Yu Xuan was born weighing just 7.47oz, which is the size of an apple. She was delivered at just under 25 weeks and measured at 24cm long.

The previous record-holder for the smallest baby ever at birth was a girl in the US who weighed 245g at birth in 2018, according to the BBC. Yu Xuan’s mother gave birth to her by emergency C-section four months early after she was diagnosed with pre-eclampsia. At the time of writing this, Yu Xuan now weighs a healthy 14 lbs!

According to Singapore’s National University Hospital (NUH), the hospital where she was born, Yu Xuan had a very limited chance of survival. “Against the odds, with health complications present at birth, she has inspired people around her with her perseverance and growth, which makes her an extraordinary ‘Covid-19’ baby – a ray of hope amid turmoil,” the hospital said in a statement.

During her time in the hospital, Yu Xuan underwent multiple treatments and was hooked up to several different kinds of machines in order to keep her alive and breathing.

She still has to progress a bit, but will get better with time

At this time, Yu Xuan still has chronic lung disease and will need help breathing at home, but that she has progressed well enough to be discharged. NUH doctors say she is expected to get better with time. Mom Wong Mei Ling says that her daughter’s birth and size came as a shock as she delivered her first child, a now-four-year-old boy, at term.

The parents were able to pay for their newborn’s medical bills with the help of a campaign that helped to raise $270,601. So happy to hear that Yu Xuan is alive and well and is able to go home with mom and dad once and for all!