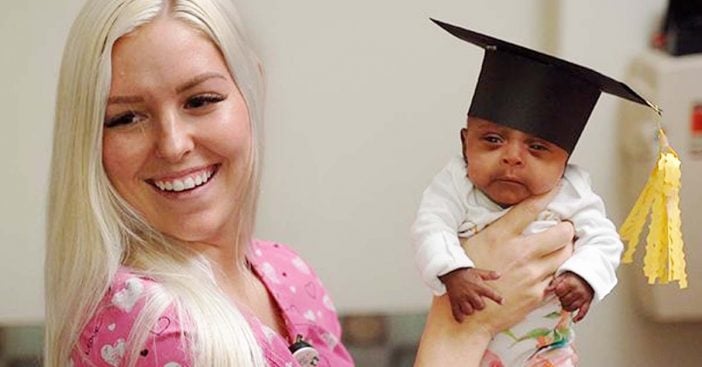 A baby girl, known as the world’s smallest surviving baby, was nicknamed Saybie by her care team and is finally home from the hospital. Saybie was born in December 2018 weighing in at only 8.6 ounces. She fit in the palm of their hands! Saybie was delivered exactly at 23 weeks and 3 days (a full-term pregnancy is 40 weeks).

Saybie was now known as a micro-preemie or an especially small premature baby. Her mother decided to participate in a video about the micro-preemie’s birth story for the care unit. She described how the experience was for her, being the mother of a micro-preemie.

“It was the scariest day of my life,” Saybie’s mother recalls. She remembers feeling unwell and going to the hospital. “They told me that I had preeclampsia, my blood pressure was really, really high … and we had to deliver her really quick.”

Preeclampsia is a type of high blood pressure that can happen during pregnancy after 20 weeks. Preeclampsia can cause kidney problems, impaired kidney function, nausea, severe headaches, and fluid in the lungs. This is why the immediate delivery of your baby is the best treatment for the mother.

Soon enough, they’d realize that their daughter was defying all health odds. She received a whole five months of care in the NICU. According to University of Iowa’s Tiniest Baby Registry, Saybie is officially the world’s smallest surviving baby, clocking in at 5 lbs when she was discharged.

While Saybie is still very small at just 5 lbs, she is happy and healthy. That’s all we could ever hope for!

Sharp HealthCare has posted the video of Saybie’s mother talking about her experience on their YouTube channel. It also includes interviews with hospital staff. A very educational video, Saybie’s mother chooses to be anonymous and solely provides just her voice for the video. I recommend all mothers or expecting mothers give it a look!

Check out what one waitress did after she learns her favorite customers lost their baby suddenly.

Previous article: IHOP Revealed Their Second Name Change And People Are So Confused
Next Post: Jerry Lewis And Dean Martin In Radio Were A Booming Success