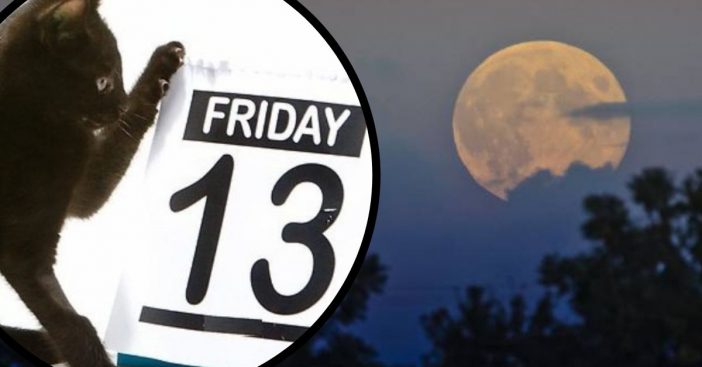 A full moon is taking place on the evening of Friday the 13th this week. How much more spooky can it get?! A rare Harvest Moon will be visible across the United States on Friday, September 13th and into the early hours of Saturday, September 14th. There’s no better way to ring in the autumn season (even though fall doesn’t really begin until September 23rd)!

The Old Farmer’s Almanac says that the Harvest Moon is a full moon that appears near the start of fall, known as the autumnal equinox. It usually coincides with the September full moon. Sometimes it can also occur around the October full moon instead. Looks like we got it early!

Why the Harvest Moon on Friday the 13th is so rare

Once the moon reaches its last quarter in the newest cycle, it will go back to the usual 50-minute delay. Pretty neat!

For those interested, the Harvest Moon will reach its peak at 12:33 a.m. ET on September 14th for people on the East Coast. Central, Mountain or Pacific time zones can expect to see it shortly after sunset on September 13th.

Do You Believe In Friday the 13th?

According to National Geographic, the origins of Friday the 13th are deeply rooted in Christianity. Many remember the 13th guest at the Last Supper was the apostle Judas, who betrays Jesus. Jesus’s crucifixion also takes place on a Friday. Another theory is that the number “13” is unlucky for coming after the “complete” number twelve (12 months in a year, 12 zodiac signs, and more).

A folklore historian also explains, “It’s been estimated that $800 or $900 million is lost in business on this day.” This is because many people are so superstitious that they avoid making big purchases or risky financial ventures on that day in particular.

Do you believe in the superstitions surrounding Friday the 13th? Just don’t let it get in the way of witnessing the rare Harvest Moon!

Relive The Iconic Apollo 11 Moon Landing Live On Your Computer.

Click for next Article
Previous article: Olivia Newton-John Receives Surprise Get-Together From Oprah And Gayle King During Cancer Battle
Next Post: Six Powerful Quotes To Remember On The Anniversary Of 9/11