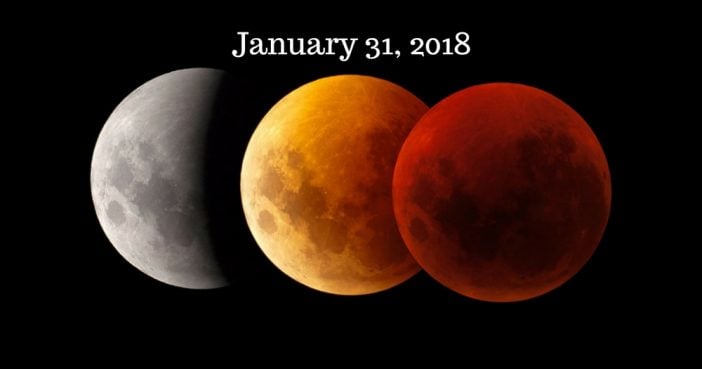 No enthusiastic skywatcher ever misses a total eclipse of the moon. The spectacle of the lunar disk slipping into Earth’s shadow and turning a deep shade of red is often more striking and engaging than one might think. What’s more, when the moon is entering into and later emerging out of Earth’s shadow, secondary phenomena may be overlooked, but these additional features of the eclipse are worth looking out for.

There hasn’t been a triple lineup like this since 1982 and the next won’t occur until 2037. It will mark the first time in 152 years that this triple play will have been visible from the Americas, and no one else anywhere on Earth has seen the conjunction for 35 years.

To help prepare for the upcoming eclipse Wednesday morning (Jan. 31), which NASA has dubbed a “Super Blue Blood Moon” eclipse due to its occurrence near perigee and during the second full moon of January, Space.com has prepared a step-by-step chronology of the eclipses’ major phases and some of the secondary phenomena you might expect to see. Not all of the events mentioned in the chronology will necessarily occur because no two eclipses are the same. But many wills and those who know what to look for have a better chance of seeing them!

In the above timetable, all times are for a.m. on Jan. 31. When dashes are provided, it means that the moon has set and is no longer visible. Below are the numbered stages listed above, fully described:

The shadow cone of the Earth has two parts: a dark, inner umbra, surrounded by a lighter penumbra. The penumbra is the pale outer portion of Earth’s shadow. Although the eclipse begins officially when the moon enters the penumbra, this is, in essence, an academic event. You won’t see anything unusual happening to the moon — at least not just yet. The Earth’s penumbral shadow is so faint that it remains invisible until the moon is deeply immersed in it. We must wait until the penumbra has reached about 70 percent across the moon’s disk. So for about 40 minutes after the “start” of the partial eclipse, the full moon will continue to appear to shine normally, although with each passing minute it is progressing ever deeper into Earth’s outer shadow.

Now the moon has progressed far enough into the penumbra that the shadow should be evident on the moon’s disk. Start looking for a very subtle, light shading to appear on the moon’s left portion. This will become increasingly evident as the minutes pass, with the shading appearing to spread and deepen. Just before the moon begins to enter Earth’s dark umbral shadow, the penumbra should appear as an obvious smudge or tarnishing of the moon’s left portion.

The moon now begins to cross into the Earth’s dark central shadow, called the umbra. A small dark scallop begins to appear on the moon’s left-hand (eastern) limb, or it’s apparent edge. The partial phases of the eclipse begin; the pace quickens and the change is dramatic. The umbra is much darker than the penumbra and fairly sharp-edged. As the minute’s pass, the dark shadow appears to slowly creep across the moon’s face. At first, the moon’s limb may seem to vanish inside of the umbra, but much later, as it moves in deeper you’ll probably notice it glowing dimly orange, red or brown. Notice also that the edge of the Earth’s shadow projected on the moon is curved. Here is visible evidence that the Earth is a sphere, as deduced by Aristotle from lunar eclipses he observed in the fourth century B.C. Almost as if a dimmer switch was slowly being turned down, the surrounding landscape and deep shadows of a brilliant moonlit night begin to fade away.

With three-quarters of the moon’s disk now eclipsed by the umbra, the part of it that is immersed in shadow should begin to very faintly light up— like a piece of iron heated to the point where it just begins to glow. It now becomes obvious that the umbral shadow does not create complete darkness on the lunar surface. Using binoculars or a telescope, the shadow’s outer part is usually light enough to reveal lunar maria and craters, but the central part is much darker, and sometimes no surface features are recognizable. Colors in the umbra vary greatly from one eclipse to the next, reds and gray usually predominate, but sometimes browns, blues, and other tints are encountered.

5. Less than 5 minutes to totality:

Several minutes before (and after) totality, the contrast between the remaining pale-yellow sliver of the moon’s surface and the ruddy-brown coloration spread over the rest of the disk may produce a beautiful phenomenon known to some as the “Japanese Lantern Effect.”