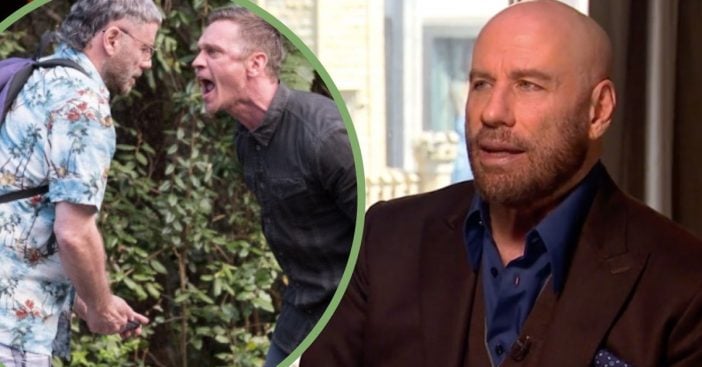 John Travolta recently sat down for a new interview surrounding his role in the new film The Fanatic. The new film is slated for a limited-time theatrical release on August 30th before its release on streaming platforms.

In the new interview, Travolta also talks about wild fans he has encountered in life as well as his personal favorite movie roles! Is Danny Zuko from Grease on that list?

“Have you had to deal with fans like Moose?” The interviewer asks Travolta. Moose is the name of the character that Travolta plays in The Fanatic, so that gives us some insight into what the film could be about (don’t worry, no spoilers here)! “I have, but it’s not ever been traumatizing or upsetting,” Travolta responds. “It’s always been kind of well-intended, but maybe crossed the line by accident.”

Travolta recognizes that he has been subjected to the relationship between fan and fame for 45 years now. So, in conclusion, he’s pretty used to it and isn’t scared off by those interactions!

What kind of roles does Travolta like to play? He Has A Simple Answer…

Then comes the question of, “Who do you like to play?” in terms of types of characters. Travolta has a simple answer for that one. He says pretty much whoever writes the best stuff! “I really get a kick out of good writing,” he says. One film that Travolta mentions is A Civil Action (1998), where he plays the role of Jan Schlichtmann.

He says as soon as he saw the script for one of the scenes in the film, Travolta “couldn’t wait to do this.” As for a favorite film role Travolta has, he says he’s going “current,” and loves watching his character, Moose. He says he can disconnect from the film and watch as a member of the audience.

Okay, I said there would be no spoilers, but here’s just a little bit of info on the synopsis! According to IMDb, The Fanatic is a thriller film. “A rabid film fan (Travolta) stalks his favorite action hero and destroys the star’s life,” the brief synopsis states.

Can you imagine the types of fans Travolta has had to deal with that are like a real-life Moose?

John Travolta and Olivia Newton-John may be teaming up for a new project soon! Find out more details here.

Click for next Article
Previous article: ‘Brady Bunch’ Stars Get Served Nostalgic Meals Of Pork Chops And Applesauce On ‘Chopped’
Next Post: Bill Bixby’s Biographer Looks Back At ‘Hulk’ Star’s Successful Yet Sad And Challenging Life