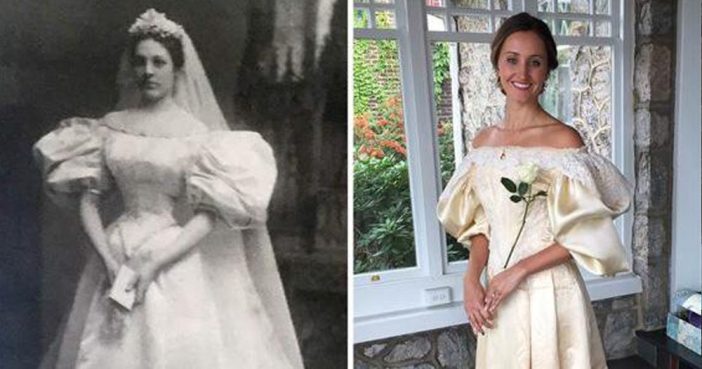 People often think that the younger generations today have forgotten the meaning of tradition. Abigail Kingston contradicts that. In 2014 in Pennsylvania, she married her fiancé in a 120-year-old dress. She was the 11th bride in her family to walk this dress down the aisle.

The long lifetime of the dress started in 1895, when Mary Lowry Warren, Kingston’s great-great-grandmother, wore the dress at her wedding. Since then, it has seen countless wardrobes, seamstresses, and of course, brides.

Kingston and her mother, Leslie Woodruff, the sixth bride to wear the infamous dress, tracked down the dress from Kingston’s great-aunt. When it arrived, it dashed their hopes immediately.

Browned from age, the dress was full of holes and torn at the sleeves. It looked nothing like the beautiful Victorian heirloom Kingston had seen in the photo, framed above the piano while she practiced as a child.

Luckily, through word-of-mouth, Kingston and Woodruff found bridal designer Deborah LoPresti, who had restored vintage dresses in the past. Even to LoPresti, the dress appeared to be literally hanging on by a thread. She moved forward with the restoration anyway, even though every bride before Kingston had already altered it.

Approximately 200 hours of restoration later, LoPresti brought the dress back to life, including the classic pastry-shaped sleeves. According to Lehigh Valley Style, “LoPresti’s alterations took five dress fittings, six months and a total of 200 hours to complete, but the results are striking. She was able to remove the brown staining and restore the dress to a champagne color while also adjusting the sleeves and the bodice to complement Abby’s body. Along with dry cleaning services courtesy of Gary Harpe’s Prestige Dry Cleaners in Lopatcong, the dress looks better than ever.”

Since Abby was all about tradition, it’s no surprise that she did not want her fiancé seeing this dress before their wedding. This took more than just keeping him out of the bedroom or the house the day of the wedding, however. The stories of the 120-year-old dress circulated the internet. So. she asked her fiancé to stay off all social media prior to the big day.

He did. The first time he saw the dress was the day they said their vows. Talk about the ultimate challenge of preventing bad luck!

It’s safe to say this dress has seen it all, but mostly love. One of the only times brides did not regularly wear the dress was, shockingly, for the daughters of Warren (the original dress owner).  During that time, brides were looking for a much more “modern” look, referring to the 1920’s flapper style. However, for 120 years, it was never forgotten.

Per the tradition of keeping the dress with the mother of the most recent bride who wore it, it now resides with Woodruff, patiently awaiting its next wedding.

One woman had her grandma put on her old wedding dress… cue the tears!