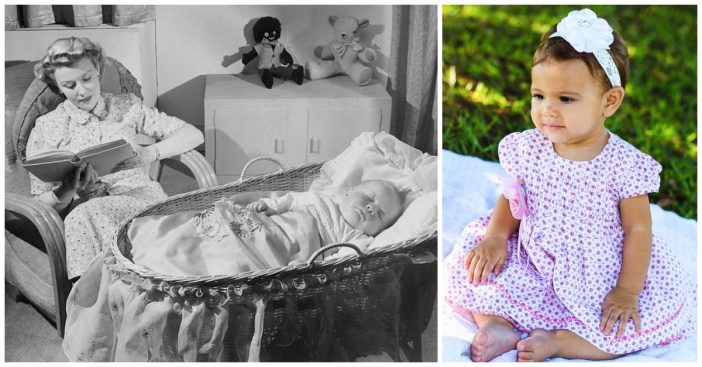 When picking a name for a baby, parents often want a name that stands out. Whether a name for a boy, or proper girl names, the perfect choice must be made! There are a lot of common names out there that get overused, but picking a classic or vintage name can be a great way to find something unique.

The name ‘Eleanor’ is an absolutely gorgeous vintage name. Whether you’re getting the inspiration from Eleanor Roosevelt or Eleanor Rigby, it’s a stunning name for a stunning little lady. It means “bright, shining one” in Greek.

Ruby was a popular name back in the 1920s. It’s derived from the Latin ‘ruber’, meaning ‘red.’ Another stunning name to compare to that of a jewel or gem as well.

One might think of Audrey Hepburn when they hear this name! The name ‘Audrey’ encompasses the meaning of “nobility and strength.”

The name ‘Margaret’ was very popular in the 1900s, but it didn’t stick around. Now it’s back! Derived from the French and Latin, specifically from the noun margaron, it means ‘pearl.’

A cute flower and a cute name for a cute little baby girl! It comes from the Old English word daegeseage, meaning ‘day’s eye.’

Evelyn is a beautiful name that was popular back in the 1930s. Evelyn typically stands out from the first half of the name, ‘Eve,’ meaning “first woman.” It contains a religious origin, and it’s Hebrew for “life” or “living.”

This beautiful name has been used since the Middle Ages! It comes from the violet flower, and flower names weren’t popularized until the 19th century.

The meaning of this classic, beautiful name is “of the nobility.” It became a popular name after Lewis Carrol’s Alice in Wonderland was published in 1865.

This name dates back to at least the 14th century, where King Charles II of England had two illegitimate daughters, one of whom was named Charlotte de Bourbon-La Marche. Of French origin, it’s the female form of Charlot, which in itself is a variation of Charles.

The name oftentimes means “heavenly” and “divine.” Of Italian origin, there is a mythological essence to it as well, with Diana translating to Artemis from Latin. Frequently the name goes back to the Greek and Roman goddess Diana.

Derived from the Roman family name Aemilius, it’s the feminine form of Emil. The words most often associated with the name Emily are industrious and hardworking.

Meaning “free woman” and “beloved,” Caroline is derived from the male name Karl (or Charles). As an extra bonus, there are a variety of nicknames associated with Caroline, among them Caz, Carole, Carol, Carly and Carrie. One of the earliest people on record with that name is Caroline Ansbach, the British queen consort of King George II, who lived from 1683 to 1737.

There are so many nice words associated with Lily, including “pure,” “passion” and “rebirth.” It comes from the flower of the same name.

From Greek, Mary can mean rebelliousness, beloved or — and we like the poetic sound of this one — a drop of the sea. There’s a belief that the name may have originated from the Egyptian language.

The feminine form of the name Alexander, this name brings with it the idea of defending and protecting — which seems a little hard to believe when you look at that cutie above.

Do any of these beautiful vintage names catch your eye? Be sure to share this article with your friends and family if they did!