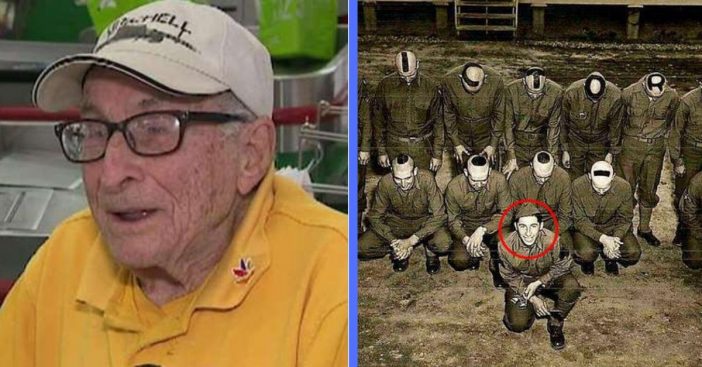 A 97-year-old World War II veteran named Bartolomeo “Bennie” Ficeto is still working at a New Jersey grocery store! He completes two shifts per week and used to be a gunner on fighter planes when he served in the war. Now, he helps customers at the checkout counter at his Stop & Shop location.

Bennie was on Fox News First speaking with host Heather Childers about his time working at the grocery store. He says he doesn’t even take his 15-minute breaks at work. “I’m going for 100,” he says, in reference to his age. We think he could make it!

Bennie and his connection with customers

Bennie wears a hat with a B-25 Mitchell bomber on the front. He remembers combat during the war as being “very dangerous” and genuinely was not sure if he’d make it home. “The day I didn’t fly out, they shot my plane down,” he recalled about his time serving.

Many of the Fox News cameras recorded Bennie talking with many of the customers and sharing stories of combat with one another. One customer had actually told Bennie of when he served in the Korean and Vietnam wars and the two shook hands. “Glad you made it back. We both made it home OK,” the customer told Bennie, “It’s for the people, the men that never came back.”

Bennie’s been doing odd jobs since he fully retired from his job as a cosmetics company warehouse supervisor back in the 1980s. He continues to work because he absolutely loves just having something to do and putting in that effort to get the job done.

Store manager Sal Marconi says “Bennie’s a joy, he’s full of life, he’s happy.” Bennie allegedly told reporters that he’s still got a lot of life left in him, he’s sharp as a tack, and plans to work until “he drops dead.” Definitely still has some humor, too!

“I get a feeling that I did something good. You can’t just stand around, like an idiot. You have to have a reason to keep alive,” Bennie said. He definitely has the right attitude about life!

Meet Bennie and learn a little bit about him and his interactions with customers at his Stop & Shop!

Take a look at the story of another World War II veteran being gifted his favorite food, Arby’s, free for life!