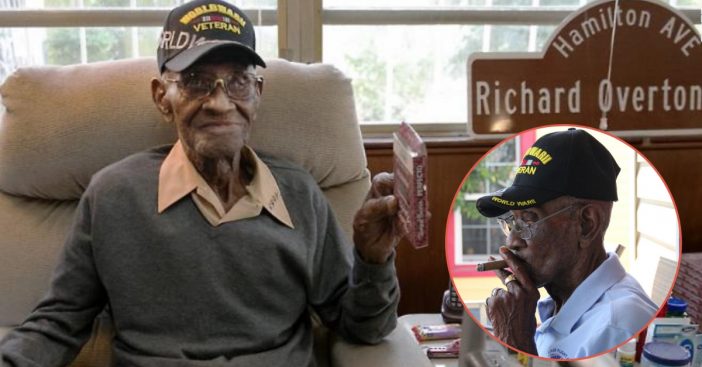 It has sadly been reported that Richard Overton, the oldest living World War II veteran and the oldest man in the United States, has passed away at the age of 112. His death was confirmed by Shirley Overton, a family member of his. The cause of death was from complications of pneumonia.

Overton enlisted in the Army in 1942 and served with the 188th Aviation Engineer Battalion. He said in an interview a while back that he enjoys whiskey in his coffee and cigars. He credits God for his long life, as he never took any medicines and just enjoyed his life.

Former President Barack Obama honored Overton at a Veteran’s Day ceremony at Arlington Cemetary back in 2013, as Overton was a long-time Texan resident.

Shortly after the world learned about the death of Overton, the U.S. Army Twitter account posted a sweet tribute statement about the 112-year-old veteran.

“Today we mourn not just a hero, but a legend,” the statement reads, “The oldest American #WWII Veteran, Richard Overton, died at the age of 112. Our thoughts and prayers go out to the Overton family. He was a hero to us all. May you rest in peace, Sir.”

Today we mourn not just a hero, but a legend.

The oldest American #WWII Veteran, Richard Overton, died at the age of 112.

Our thoughts and prayers go out to the Overton family. He was a hero to us all.

May you rest in peace Sir. https://t.co/4yGT8MmmRX

Texas Gov. Greg Abbott also released a statement upon the passing of Overton, recognizing him as “an American icon and a Texas legend“.

“Richard Overton made us proud to be Texans and proud to be Americans,” Abbott says,  “We can never repay Richard Overton for his service to our nation and for his lasting impact on the Lone Star State.” He was clearly loved by many.

Richard Overton was born in Austin, TX in 1906. When asked what his secret to such a long life is by Steve Harvey, he simply replied, “Just keep living, don’t die.” His family made t-shirts consisting of his hilarious ‘life motto’ and he’s also had a 13-minute short documentary made about him called Mr. Overton.

We couldn’t be happier to know that Richard Overton lived a long, happy life doing what he loved to do and making the most of it without worry. We are also happy to hear that he is no longer in pain or suffering. Rest in peace, Mr. Overton!

Please SHARE this article to honor the memory of Richard Overton. May he rest in peace!

Check out an old interview with Richard Overton below: