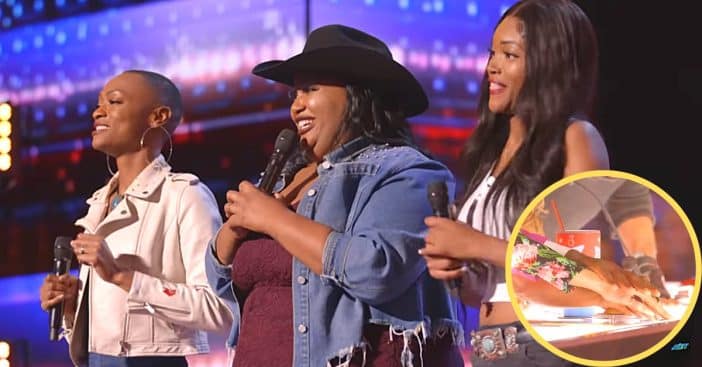 Like any competitive show, America’s Got Talent has a set of rules for participants and judges to follow, the better to make the process run smoothly and fairly. Following an audition, acts need three buzzers of approval for the judges before proceeding. Each individual judge can use their Golden Buzzer once, which automatically advances an act. The singing trio Chapel Hart ended up delivering a performance so powerful that these traditions flew right out the window.

Tuesday’s episode saw two Mississippi sisters and their cousin perform for judges Sofia Vergara, Simon Cowell, Heidi Klum, and Howie Mandel. They sang an original composition that also acts as a tribute to Dolly Parton – and a direct response to the sensational song, “Jolene.” What unfolded that made all judges do something that happens with a particular rarity?

Jolene can have this one, Chapel Hart will take the real prize

Danica and Devynn Hart along with cousin Trea Swindle combine their musical prowess to form Chapel Hart. They consider it their goal “to gift wrap their Mississippi roots & Louisiana spunk and share it with listeners around the world.” To do this, they are looking to share their creativity with a wide audience, which they got this week, showcasing an original song they called “You Can Have Him, Jolene.” This nostalgic tune is a response to Parton’s 1974 chart-topper that still inspires today.

This time, the singer has “had time to think it over,” along with “A lot of tears, a lot a beer, a lot of wine.” The singer decides “He’s your problem good luck keeping him home,” since after there were such doubts, “when you think that he’s in love surely leave / Like he did me.”

The ‘America’s Got Talent’ judges break the rules

The song was a hit, thanks to the talent of the artists behind it. “Trust me, I needed you today,” admitted the notoriously critical Cowell. “That was fantastic. I love you.” This alone makes for a noteworthy moment in the group’s history, but it has already been riddled with memorable challenges. “We’ve been trying to break into Nashville for the last couple of years, but it’s been kind of hard,” one member revealed. “Country music doesn’t always look like us.” The performance caught the attention of Dolly Parton herself and the country queen offered praise for the latest generation of stars! Loretta Lynn would also like to make a request.

They were also a hit with the judges, who felt Chapel Hart carried themselves as long-established industry professionals. The way judges show their love in the biggest way would have been a Golden Buzzer. Just one would have done – or three red buzzers – but Cowell and Klum had already used theirs; the two even said if they had not done so, this honor would have gone to the trio. That’s when the judges huddled together and concluded rules are meant to be broken. In a powerful moment, on the count of five, they all hit their Golden Buzzers.

Check out the historic performance and response in the video below!