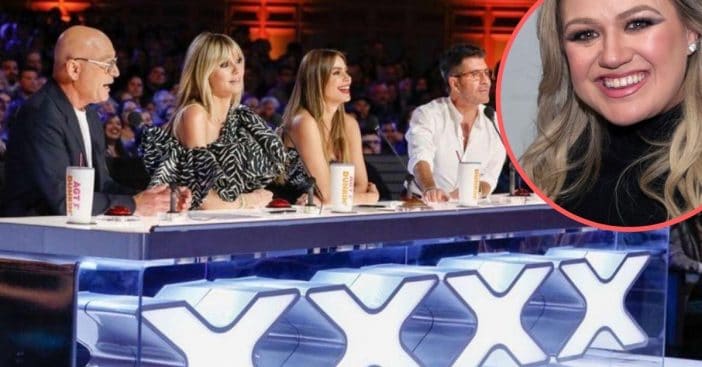 Simon Cowell recently suffered a back injury after a bike accident. He had to have a five-hour surgery to correct the issue and is now resting. Simon will be on medical leave for now, which means America’s Got Talent (AGT) had to find a new judge.

Kelly Clarkson is set to fill Simon’s spot with judges Howie Mandel, Heidi Klum, and Sofia Vergara during the AGT live shows. Kelly and Simon have a lot of history as he was a judge when Kelly Clarkson won American Idol.

Kelly shared the news on Instagram with lots of jokes. She shared a photo of an “urgent memo.” It read, “My friend, Simon Cowell, is doing better now but was in an accident and won’t be able to make Tuesday and Wednesday’s live shows for ‘AGT.’ But no worries America, someone far wiser, cooler, and hotter is taking his seat! The unbelievably amazing Kelly Clarkson 😜 You’re welcome in advance!”

Simon spoke out about his injury on Twitter, writing, “Some good advice, if you buy an electric trail bike, read the manual before you ride it for the first time. Thank you to everyone for your kind messages. And a massive thank you to all the nurses and doctors. Some of the nicest people I have ever met.”

Some good advice…
If you buy an electric trail bike, read the manual before you ride it for the first time.
I have broken part of my back.
Thank you to everyone for your kind messages.

Just a few months ago, Kelly had the crew of judges and host Terry Crews on her talk show The Kelly Clarkson Show. They reunited virtually and talked about AGT. AGT has had a lot of setbacks due to the coronavirus pandemic. However, they are continuing with the live shows while following social distancing rules. Watch Kelly on AGT tonight!

Click for next Article
Previous article: Goldie Hawn Shakes it Like a ‘Polaroid Picture’ as She Cleans Dishes with Family in Fun Video
Next Post: Old JCPenney And Sears Stores May Turn Into Amazon Fulfillment Centers