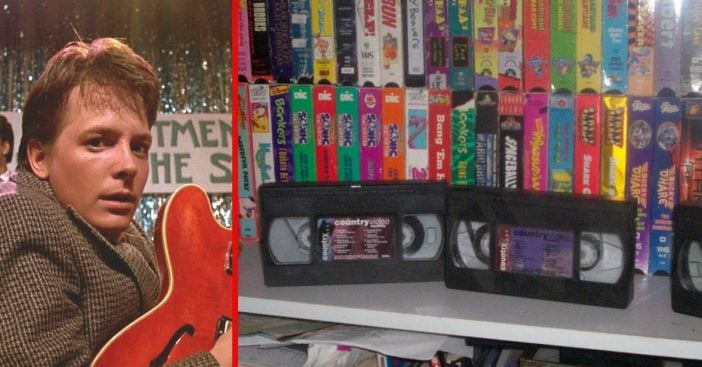 VHS tapes had a long history of allowing movie fans to revisit their favorite cinematic moments again and again. Although the standard format has since shifted to DVDs and streaming, tapes attract a lot of fanfare. In particular, one sealed VHS tape of Back to the Future sold for $75,000 at auction.

If all calculations are correct, this was the most expensive of the hundreds of tapes auctioned by Heritage Auctions. It was part of a broader collection of movies from the 1970s and ’80s, mostly first edition releases. Learn more about this timeless treasure here.

Sealed VHS tape brings viewers back to the future

The VHS in question actually comes from Back to the Future actor Tom Wilson, known as Biff Tannen in the series. “This is a VHS tape of the first release of Back to the Future, sent to me by the studio at that time,” he wrote in a signed note that came with the tape.

RELATED: Your Old Disney VHS Tapes Could Be Worth A Fortune!

He continues, “Since I knew that the VHS platform would be around forever, I saved it for later and now I can’t find a VCR. Oh well. Enjoy!” That’s not totally a joke; a Gallup poll found that in 2014, 58% of Americans still own a VHS player. That number had been as high as 88% in 2005.

Continuing to stand the test of time

This was Heritage Auctions’ first VHS-exclusive auction to date and, in addition to the top-seller Back to the Future, featured 260 movies on the classic format. Among this collection was a promotional copy of Top Gun, which just celebrated the release of a blockbuster sequel, Jaws, Ghostbusters, and a copy of The Goonies that sold for $50,000.

All items had been factory-sealed in their original packaging and had to undergo authentication from a certified grading service. These qualities are the most sought-after among collectors, especially when the tape is first edition. For example, Jaws sold for $32,500, while Ghostbusters sold for $23,750. It’s anticipated that Back to the Future currently represents the most expensive sale of a VHS at auction in history. The auction house predicted sales of half a million dollars. When all was said and done, this historic auction generated $584,750. Heritage Auctions executive vice president Joe Maddalena said in response to this enthusiasm, “The success of this inaugural auction shows, again, the power these movies and this format hold over audiences young and old. This is a new area of collecting, and it’s clear there’s a deep love for what we’re offering. We can’t wait for the next VHS auction.”

RELATED: ‘Back To The Future’ Co-Stars Reunite And Say It’s Like ‘No Time Has Passed’