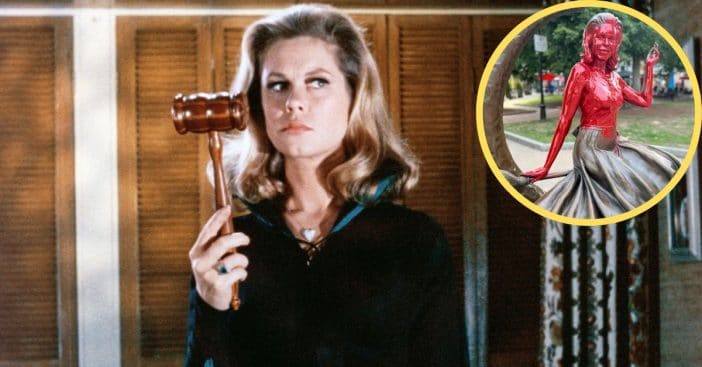 “Oh my stars,” Samantha Stephens would say if she saw this mess. Earlier this week, a famous statue depicting the lead character from Bewitched was vandalized. The monument is located in Salem, Massachusetts, the site of the infamous witch trials of the 1690s.

For a time, it was covered in red paint after a local resident spray painted the bronze surface. Standing at nine feet, the idol of Elizabeth Montgomery caused a bit of a stir on and off since it was erected in 2005, with critics saying it belittled the real tragedy that occurred there. So far, it seems the alleged vandal’s motivations were unrelated.

Salem’s Lappin Park hosts a bronze statue of Montgomery in one of her most iconic roles of Samantha Stephens, hand raised and poised to do magic, while she sits astride a broomstick in front of a crescent moon. On Monday, the normally brown-colored sculpture was a vivid red. Salem Police Department captain John Burke says that around 4:50 pm on Monday, witnesses called in seeing a man dying the statue.

“We were eating and we actually smelled the paint in the air, and my wife said, ‘What is he doing?'” said witness Richard Rennard, who first realized something was happening because of the strong odor of spray paint. “I got up and yelled, and one of our friends got up and called the police.” A brief chase ensued before the suspect paused to lay down and two more witnesses confirmed his identity to the police.

What happened to Samantha?

In between meetings, was disappointed to hear the Bewitched Samantha statute downtown was vandalized. I’m grateful to @SalemMAPolice for their quick work apprehending the individual responsible. We'll work to get the statue cleaned, as fast as a twitch of Samantha's nose. pic.twitter.com/Cj5wHNlOGk

“In between meetings, was disappointed to hear the Bewitched Samantha statute downtown was vandalized,” said Salem Mayor Kim Driscoll in a tweet later that evening. “I’m grateful to (Salem police) for their quick work apprehending the individual responsible. We’ll work to get the statue cleaned, as fast as a twitch of Samantha’s nose.” Indeed, thirty minutes after sharing that, the mayor also revealed that the paint from the upper half of the statue seemed to have been removed.

Why was the Bewitched statue vandalized? Was it due to lingering criticism against its presence where 25 innocent people died? In this case, it does not seem so. The suspect has been identified as a 32-year-old Salem resident who was “going through a rough time and wanted to do something to get arrested,” according to a local prosecutor. The suspect’s attorney says his marriage had recently ended and he’d been living in a shelter for two weeks, and he had been seeking a new job.