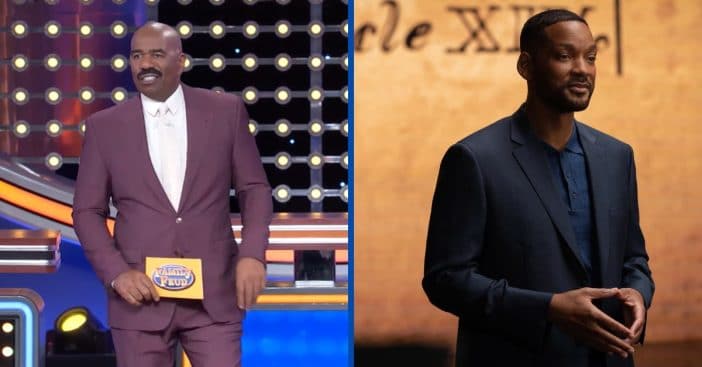 After Will Smith slapped Chris Rock at the Oscars, people from all walks of life have debated the ethics of his actions and debated what they themselves would have done in either man’s place. Recently, Family Feud host Steve Harvey joined the discussion while delivering a speech at an Atlanta Law School.

Harvey delivered a keynote address at Georgia State University. Dozens of law students were in attendance as well as over a hundred guests. There, he covered a variety of topics across some two hours, from his new show to the Oscars slap. That is when he shared some of his thoughts on the matter.

Harvey has joined the list of people touching upon the Smith and Rock Oscars slap. His discussion came while talking about his faith. “I’m a Christian, but I’m really undeveloped,” Harvey began. “I don’t have high-level Christianity. On a scale of 1 to 10, I’m like a 2. That’s the level of Christianity I can work on.”

He went on, “You slap T.D. Jakes, he’ll turn the other cheek. You slap me? If you sit back in your seat, Jada would have to move out of the way. That’s the type of Christian I am.” Harvey went on to call the slap a “punk move” and is also reported to have said that because of the incident, “I lost a lot of respect for him.”

The future for Steve Harvey and fallout for Will Smith

Harvey and Smith seem to be on different trajectories, looking at their plans after the slap. While more and more projects for Smith are being put on the back burner, Harvey is engaged in a new show of his since January, Judge Steve Harvey. In it, Harvey is judge and jury in an unscripted courthouse comedy, where he mitigates all sorts of cases from the serious to the silly. Harvey is famous for his expressive reactions on TV and this gives him a great stage to show them all off.

Meanwhile, Smith has been banned from the Oscars for ten years, though he was allowed to keep his award for his performance in King Richard, where he portrayed the father of tennis legends Venus and Serena Williams. Even Richard Williams has shared his thoughts on the slap and he expressed condemnation against violence, echoing the sentiments shared by members of Rock’s immediate family.

RELATED: Will Smith Goes On Vacation As His Projects Dry Up

Click for next Article
Previous article: Catholic University Claims ‘The Wizard Of Oz’ Dress Is Rightfully Theirs
Next Post: Danny Bonaduce Shares His Low Salary From ‘The Partridge Family’