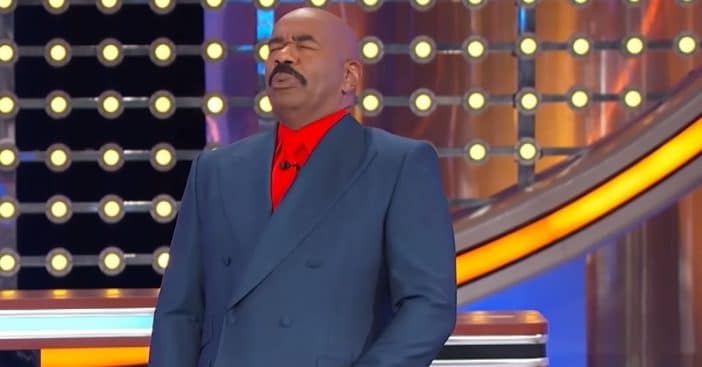 Hosting a game show full of freehand answers from all walks of American life, Steve Harvey has seen all manner of responses he’s had to respond to. Usually, it’s him giving off funny, indignant reactions to participant antics. This time, an answer seemed to fire back at Harvey enough that he exploded at the game he’s hosted for over a decade.

The faithful among Family Feud’s recent episode had an advantage for one particular question. The Brewer and Jones families were asked to consider both the bible and who Steve Harvey might best embody from the religious text.

Steve Harvey in ‘The Bible’

In a recent Family Feud episode, the Brewer and Jones families were asked to “name a part you could see Steve Harvey playing in a TV miniseries of The Bible.” The Jones family did not suggest Jonah, close spelling of their almost biblical last name. But Danielle with the Brewers suggested “Jesus.”

RELATED: 9 Most Unusual Religions That Actually Exist, And You Won’t Believe Their Philosophies

Harvey wasn’t thrilled by the answer but the response was, in fact, on the board at spot number three. This victory paved the way for the Brewers to guess more biblical figures Steve Harvey might best portray in a miniseries dedicated to the bible. That’s when the replies started snarking back at the famously witty game show host.

The Brewers scored a big victory by guessing Moses, the prophet and deliverer of the slaves from Egypt to Israel. That ended up the number one answer that earned the family 36 points. To keep the momentum going, Russ then contributed Judas. “Judas?” Harvey fired back. Russ offered in assurance, “Sorry, man. All love.”

For however much Harvey was upset Russ would suggest such a thing, his indignation was not over. “Please don’t let that be up there,” he prayed in vain, as Judas ended up the fifth answer. All this betrayal sparked the declaration, “This is a stupid game. This is such a stupid game.” The Jones family did nothing to get into his good graces either, as teammate Tene then suggested, “Sorry, Steve. The devil.”

When the Jones family offered this slight without even the benefit of it being on the board, Harvey at last exploded, “Look at me. Look at me! And then five of y’all stood in a circle and came out with the d—n devil. Satan! Jesus, really? Judas was bad enough … The dark angel? Satan? Lucifer?” These are the kinds of actions that inspire people to commit a betrayal of their own…