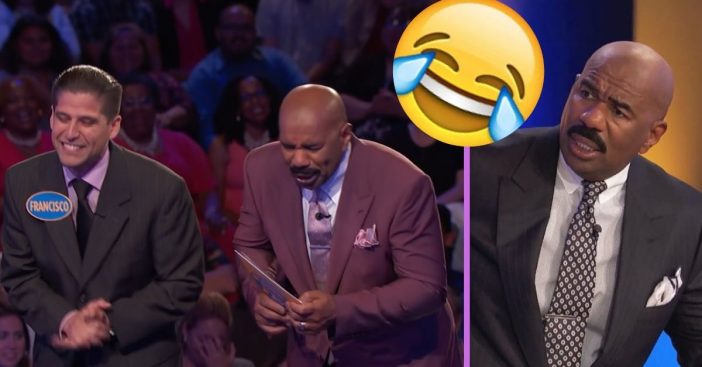 We watch game shows for many reasons. The hosts contribute to a lot of that. Steve Harvey consistently has fun, expressive reactions to contestants. That’s part of Family Feud‘s appeal. In fact, just watching him alone is worthy of a video montage. Unsurprisingly, he gave an outstanding reaction to a fan’s equally…unique… answer to a question during the Fast Money round.

Harvey gave the prompt. It read, “Name a part of a man’s body that if hair were ripped from it, it might cause him to cry.” Contestant Francisco, representing the Abundis family, answered immediately. His reply is probably exactly what you’re thinking, or in the same mindset. Remarkably, this marked a unique occurrence for the show as Steve Harvey gave a new hilarious reaction of his own.

When the Fast Money round started, everything proceeded as usual…for a time. Harvey read off the new prompt, which asked for a location on the male body where ripping out hair would cause agony. Francisco of the Abundis family was ready with an answer locked and loaded. But Harvey was not totally ready to hear it in a calm and collected fashion. In the past, the host has teared up in other ways. This time, it was out of amusement.

The clock had 20 seconds left but, ultimately, even more time passed. Because when he heard Francisco’s answer, Harvey stammered out, “When you … when … when you…” Finally, Good Housekeeping writes, he concluded, “Okay, time out.” In the accompanying video, viewers can see Harvey walk away from the contestants, including the one who started it all. The audience was beside themselves as Harvey quietly tried to regain his composure at that abrupt, candid answer.

Everything came to a halt

Harvey needed about a minute or so to steady himself, though even then it was clear he had to fight to not burst out laughing again. “I had to stop ‘cause I teared up,” Harvey later explained. “[As] soon as he said [that], I heard all the men gasp.” Normally, audience members react to Harvey’s responses. This time, he got to play off of theirs and find amusement in the shared experience.

The YouTube clip already has almost half a million views as of May 1 since going up on April 22. Comments indicate viewers got as much of a kick out of the occurrence as Harvey did. They appreciated the answer – many of whom saw something like that coming – and also took time to appreciate Harvey. One comment reads, “Steve is the best thing to happen to this show. His reactions make me almost die laughing,” accompanied by faces with tears of laughter. Rather like Harvey! Others pointed out other times a situation like this happened. But what got everyone chatting was that Francisco’s answer earned 28 points in that round of Fast Money.