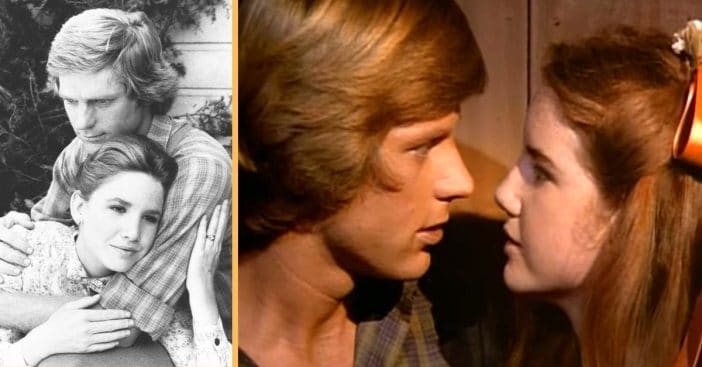 Melissa Gilbert‘s breakout role as Laura Ingalls on Little House on the Prairie saw her character go through several major milestones in life, including a first kiss. This she shared with Dean Butler playing Almanzo Wilder. As it turns out, Gilbert’s mother was witnessing her daughter’s first kiss too and the experience left her tearful.

Butler recalled the experience with Daily Planet. At the time of shooting the scene, he had been around 23, while Gilbert was around 15. Gilbert’s mother was not the only one for whom the scene was emotional; with an eight-year difference between them, she avoided intimate interactions whenever possible.

Little House on the Prairie viewers met Gilbert when she was 10 and each season followed her as both character and actress grew up. By season six, the show introduced a love interest for Laura in Almanzo Wilder, who was the real-life husband of Ingalls Wilder; the two wed in 1885 and were together until his death in 1949. Over six decades is a long time together, but the television portrayal of their budding romance started off a bit rocky.

The 1980 episode “Sweet Sixteen” sees Laura and Almanzo kiss for the first time; it’s also the first time Gilbert kissed anyone romantically. “The audience loved this episode and I think it was number one [in the Nielson TV ratings] for the week,” recalled Butler. “It ran twice in primetime that summer. Then of course there’s this famous first kiss that happens at the end of the episode.” That gesture won the show a TV Land award for “most memorable kiss in television history.” However, Butler added, “It was a funny kiss because Melissa’s mother was offscreen nearby crying. She was seeing her little girl have her first kiss ever, both onscreen and off so that was a big deal.”

It was a big deal for Gilbert too.

Putting the “sick” in “lovesick”

Gilbert herself detailed her first kiss, documented forever on-screen, in her memoir Prairie Tale. “This was Laura’s first real kiss, one she desired, and it made me sick,” she admitted. “I quipped that I would’ve preferred to kiss Scott Baio or Shaun Cassidy,” Gilbert said she replied whenever asked by the cast and crew about her kiss with Butler. “I knew those teen-idol guys were unattainable and therefore safe to mention, though the truth was, I didn’t want to kiss anyone,” especially not “a man.”

“I was hit by a perfect storm of disappointment, fear, anger, and nausea,” her memoir continues. “I’d expected the producers to cast a contemporary of mine, someone close to my age. Instead, they had cast a man! … I didn’t want to kiss a man – I didn’t want to kiss anyone with stubble.” She also had reservations about portraying romantic love when she herself had never experienced that before, and so had no real inspiration to draw from. She asked others to implore her co-star and the show’s producer Michael Landon to reduce any kisses to hugs.

None of this, though, was evident to Butler, who claims Gilbert hid her fears well because “She’s a gamer that way,” and adds “It’s [a] tribute to who Melissa is that she handled that so well” after she “was actually terribly uncomfortable in that moment.”

Click for next Article
Previous article: Richard Williams, The Muse Behind Will Smith’s ‘King Richard,’ Responds To Oscars Slap
Next Post: Are Walt Disney World Guests Done With The Famous Park?