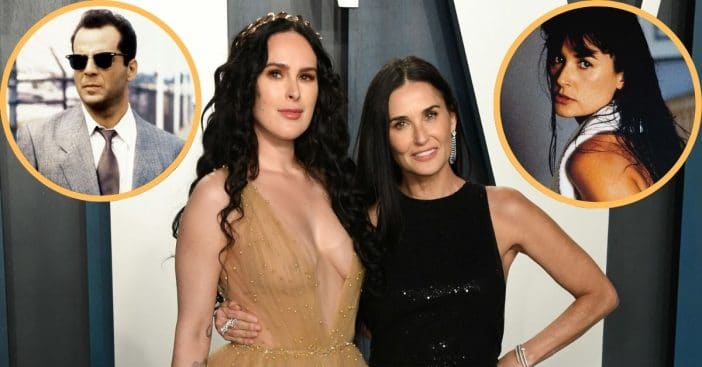 Being the child of the iconic duo of Demi Moore and Bruce Willis means there is no shortage of inspiration, and daughter Rumer Willis tapped into that inspiration twice over in her Instagram Stories, which featured throwbacks to both her parents’ earlier acting days.

Moore and Willis married back in 1987 but split up in 2000 – though, not before becoming parents to Rumer, Scout, and Tallulah. They present an amicable unit years after the divorce and both boast strong TV and film resumes Rumer referenced for some nostalgic family fun.

Before he was daredevil cop John McClane, Bruce Willis was something of a goofball actor on Moonlighting, alongside co-star Cybill Shephard. The series ran from 1985 to 1989 and blended comedy, mystery, drama, and romance in a unique formula that gave Willis his unexpected first big break.

It is a Moonlighting promotional shot from ‘85 that Rumer used to kick off her nostalgic tribute to her parents, strongly featuring Willis and Shepard. Because it was in her Stories, it disappeared after 24 hours, but after revisiting Bruce Willis’ first big break, Rumer turned to Demi Moore when appreciating her familial acting roots.

Learning the best from her favorite

Rumer took time to appreciate her mother’s filmography as well, this time spotlighting Moore in 1996’s Striptease, which made Moore the highest-paid actress in history; $12.5 million will do that to a career and wallet, while the movie itself earned a spot in the cinematic debate halls as a contender for one of the worst films in history.

Rumer drew from Striptease a clip of Moore’s character dancing around wearing nothing but a towel, shared originally by the Fleur du Mal Instagram page. In the comment section, Rumer writes, “My favorite,” and captioned the subsequent Story, “My actual morning routine. I learned from the best @Demimoore.” But this was not just a throwback to Moore’s earlier works; Striptease is the second entry in Rumer’s filmography, only after 1995’s Now and Then.