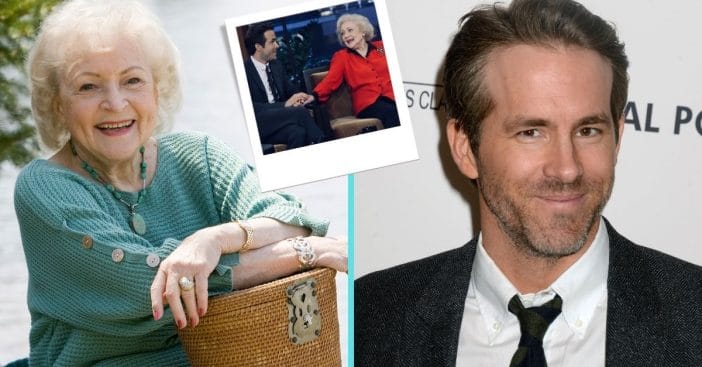 Betty White entered the entertainment industry in the 1930s and nine decades later she was still driving some intense plots before her sudden death on New Year’s Eve 2021 at age 99. One of her last was a love triangle starring herself, Ryan Reynolds, and Robert Redford. She and Reynolds starred in The Proposal with Sandra Bullock in 2009 but, according to the Golden Girls star, Reynolds has been lovesick ever since.

White would’ve been 100 years old in January 2022 but her sense of humor was as sharp as ever, as was her readiness to joke with and about her colleagues. Between their own amusement, both Bullock and Reynolds have expressed awe at White’s skill and Reynolds has eagerly matched her witty remarks with jokes of his own. Read about the sharp exchange here.

Ryan Reynolds can’t get over his “ex-girlfriend” Betty White

Since the pair worked together on The Proposal, White and Reynolds have kept up the joke that Reynolds has a crush on White and that the Golden Girl is his ex-girlfriend. White has also gone so far as to say “I’ve heard Ryan can’t get over his thing for me.” The drama gets another layer added to it, as White added, “but Robert Redford is The One.”

RELATED: Betty White And Ryan Reynolds Feuded On The Set Of ‘The Proposal’

Indeed, in addition to a joke crush, Reynolds has admitted to being a fan of White “for as long as I can remember.” Getting to work alongside her on The Proposal was an exercise of will for Reynolds as well as Bullock, as the Miss Congeniality star explained, “Timing isn’t easy in comedy, because you have to navigate other people’s timing. Betty pivots like I have never seen, making it look seamless. The rest of us just remain silent and pray we’re not cut out of the scene.”

Reynolds has no problem singing her praises even after the breakup

Himself a popular comedic actor now especially famous in the Deadpool films – and the brain behind that commercial of Satan finding love with 2020 on Match.com – Reynolds recognizes a master when he sees one. “I heard that scripts for Golden Girls were only 35 pages,” Reynolds once said, “which makes sense because so many of the laughs come from Betty simply looking at her castmates.”

Reynolds also jokingly calls White “a typical Capricorn. Sleeps all day. Out all night boozing and snacking on men.” The supposed spurned lover also heard White’s joke about his ongoing pining and took to Twitter to respond. He shared a tweet about the situation and replied, “I’m absolutely sick of the media exploiting past relationships just to drive clicks.”

Click for next Article
Previous article: Stars React To The Death Of Last-Living Golden Girl, Betty White
Next Post: Jeremy Jackson Of ‘Baywatch’ Went Through Many Trials Before Finally Getting Clean At 41