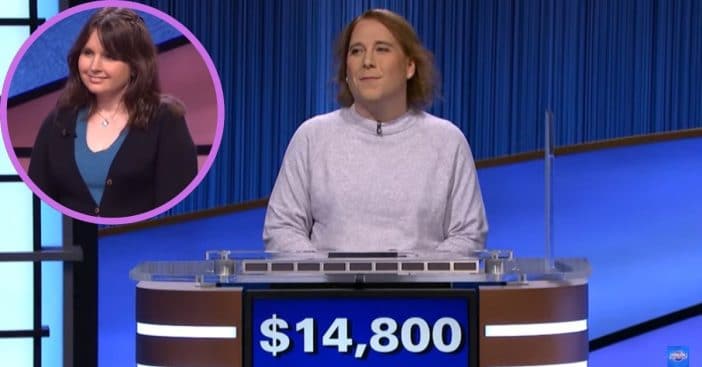 Christmas came early for Jeopardy! contestant Amy Schneider, who not only found victory in her latest bout on the show Christmas Eve but set an all-new record as the highest-earning woman on the program. After her latest victory, Schneider’s total earnings came to $706,800, passing the previous record of $222,597 set by Larissa Kelly.

Kelly set several records during her time on Jeopardy!, hosted by Ken Jennings and Mayim Bialik, including winning streaks and consecutive right answers. While some precedents have since been passed, Kelly was eager to offer congratulations to this new Jeopardy! champion and took to social media to do so in a post that conveys both reflection and excitement.

Well, it was fun to hold a Jeopardy record for a few years…but it's been even more fun to watch @Jeopardamy set new standards for excellence, on the show and off. Congratulations to Amy on becoming the woman with the highest overall earnings in the show's history! 📿👑

On Christmas Eve, Kelly took to Twitter to offer congratulations to Schneider, who had netted another Jeopardy! victory that brought her total earnings several thousands of dollars above the previous record. “Well, it was fun to hold a Jeopardy record for a few years,” she wrote, “but it’s been even more fun to watch @Jeopardamy set new standards for excellence, on the show and off. Congratulations to Amy on becoming the woman with the highest overall earnings in the show’s history.”

Later that day, Schneider replied, “Thanks so much, I’m honored to be in your company, and I look forward to some day watching the woman who beats us both!” Schneider’s winning streak currently sits at 19 consecutive wins with two more games that could bring that streak up to 21 games, notes Entertainment Weekly.

Amy Schneider is an engineering manager based in California. The 37-year-old entered the Jeopardy! scene back in November and began breaking precedents left and right, first by being the only one able to correctly answer a Final Jeopardy! question, which disrupted Andrew He’s victory streak. Now, she also has the highest winning streak among female contestants (tied with Julia Collins), highest amount of money won in a regular season, and highest amount of total winnings.

Schneider is the second transgender contestant in the show’s history and the first to start playing after coming out as transgender. Speaking about the whole experience during a Winner’s Circle interview, Schneider admitted, “I’m not going to pretend I didn’t think I could do good, but this has just been so much better than I thought I would do.” Congratulations, Amy Schneider!

Click for next Article
Previous article: Where Are Judy Garland’s Children Now?
Next Post: ‘Little House’ Stars Karen Grassle And Victor French Had The Same Addiction