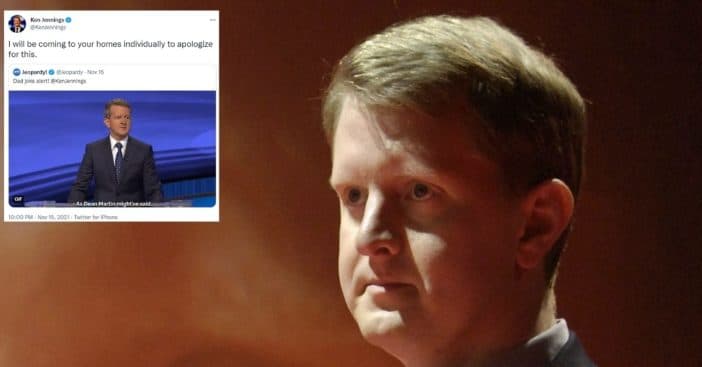 Jeopardy! champion Ken Jennings is one of the hosts of the game show right now. He has been alternating hosting duties with actress Mayim Bialik. During a recent episode, Ken made a joke that he ended up apologizing on Twitter for. Luckily for fans, it wasn’t an insensitive joke, but merely a “dad joke!” Here’s where it started…

Ken read the Double Jeopardy clue, “A very brave cleaner shrimp gets a meal of parasites and dead skin from the mouth of one of these scary predators.” One contestant replied, “What is an eel?” When asked to be more specific, he answered, “What is an electric eel?” It wasn’t right and Ken revealed that the answer was the “moray eel.”

Ken Jennings apologizes for “dad joke” he made on ‘Jeopardy!’

So then, Ken joked, “As Dean Martin might’ve said, ‘That’s Amore.'” After the episode aired, the show’s official Twitter account posted a GIF with the caption “Dad joke alert! @KenJennings.” Ken shared the tweet and wrote, “I will be coming to your homes individually to apologize for this.”

I will be coming to your homes individually to apologize for this. https://t.co/9kedQJ13xh

While he apologized for the silly joke, many fans actually loved it! It was a great look inside Ken’s personality and many people thought it was actually funny. Fellow Jeopardy! champion Matt Amodio chimed in and replied, “Everybody loves somebody who is willing to apologize.” Good thing it was actually just a silly joke because Jeopardy! has had its fair share of controversies in the past year.

What do you think of Ken’s joke and his hosting abilities? It seems he is holding his own out there!