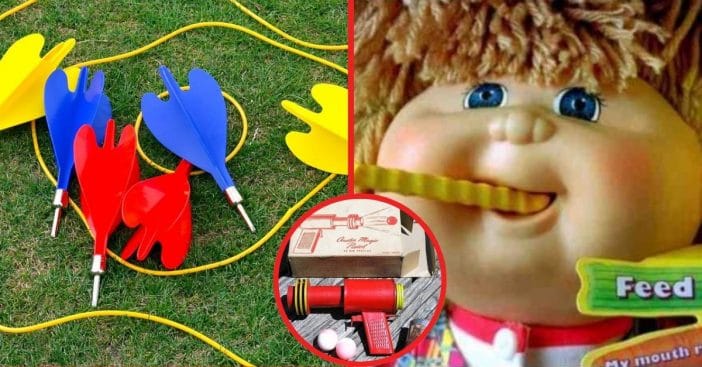 The past came with plenty of different trends that would look downright incomprehensible today. For the greatest examples, consider the dangerous toys kids used to play with, such as lawn darts and flammable ovens. Even the names would give people today some pause..

Back then, these toys were just something new and exciting to hope for each holiday or birthday, classical features that came to define childhood. But not all stayed on the market. So, let’s look at some toys that actually made it to toy shelves only to disappear quietly for fear of maiming.

Produced by Alfred Carlton Gilbert in 1950, the Gilbert U-238 Atomic Energy Laboratory kit contained alpha particles, beta particles, gamma particles and four uranium ore samples. The device was designed so kids could “actually SEE the paths of electrons and alpha particles traveling at speeds of more than 10,000 miles per SECOND!”

RELATED: 13 Dangerous Children’s Toys That Still Managed To Make It Onto Store Shelves

The timing of its release was relevant, as America wanted its kids to get interested in the sciences. By 1950 it had a listing price of $49.50, which would be $458 today. Less than a year later the toy was recalled because of concerns that children could ingest the radiation sources.

Lawn darts, sometimes called jarts, were introduced in the 1960s. It didn’t take long for them to be banned soon after, though a court case in 1970 did try to defend them. The attempt proved successful enough for them to return to the market…only to injure about 7,000 people between 1978 and 1988.

The lawn dart was made of thick plastic and a heavy weighted metal spike on the end. Players tried to throw one of these projectiles into the air so the jart would land on a lawn inside of a hoop. In 1988, after thousands of these dangerous projectiles hit people instead of inside the hoop, the United States Consumer Product Safety Commission issued a notice ordering lawn darts to be tossed away or destroyed immediately.

Mattel introduced the Belt Buckle Derringer Toy Gun in 1959. To both outlaws and the gun’s wielders alike, these appeared as unassuming toys. All the user needed to do, however, was extend their stomach, thus having the gun firing a toy bullet and a cap.

Unfortunately, the caps could be accidentally ignited by friction and caused serious burns, making this prop an outright dangerous toy to keep in circulation. Soon, it too, faced the word of the law.

When the Battlestar Galactica Missile Launcher first went into store orbits in 1978, it had the specific instructions, “Do not put or fire red missiles into mouth or towards face.” This toy might not have been dangerous if those directions were heeded, but with zealous defiance, players used the product to launch objects at faces and into mouths specifically.

A year later, in 1979, they ended up recalled, after choking, eye gouging and even a death occurred because of this death trap. When Mattel recalled the Missile Launcher, they offered a Hot Wheels car in exchange.

Clackers, also called Knockers and Click Clacks, consisted of two large acrylic balls hung on either end of a heavy string. When the user pulled the string up, two balls would swing apart and together, creating the loud clacking noise that gave the toy its name.

However, if swung too hard, the acrylic balls would shatter, turning the balls into a burst of acrylic shrapnel. Clackers ended up banned by 1985, just one of the many dangerous toys we somehow survived.

These whimsical dancing delights appeared as harmless as the fairies they resembled, fluttering like soft dandelions through the air. However, their foam wings, when spun at the high velocity required to obtain flight, could maim children. Additionally, once the cord was tugged, the Sky Dancers flew into the air at random angles, adding an element of unpredictability to their course.

Introduced in 1994, they scratched and even gouged over a hundred children until they ended up recalled six years later.

Already the Cabbage Patch Kids could cause bodily harm by sheer virtue of their existence, thanks to how popular they were as kindling to the gas fire that could be Black Friday shopping. But in particular, the Cabbage Patch Kids Snacktime Kids would literally the hand that fed it and not let go. The doll sported one-directional rotating motors in its stomach and tongue to mimic eating. This was activated when kids placed plastic food in its mouth.

The motors had no way of knowing just what counted as food and would churn anything that entered the doll’s mouth, including fingers and hair. These devices would remain activated throughout the screaming of terrified children, who found themselves being ingested by their innocent-looking doll. Introduced in 1996, the toy was ended up recalled by January the following year. A dangerous toy like that is fuel enough for some nightmarish horror movie!

My personal favorite toy that was deemed dangerous was Thingmaker’s Creepy Crawlers. I can remember everything about this great toy set, even the smell!

Made by Mattel beginning in 1964, Creepy Crawlers presented some obvious issues for the safety of children playing. Taking the plastic goop and add an electric-powered mold that heats to 300 degrees Fahrenheit is basically asking for injuries. If only burning was the only problem. The fumes that the burning plastic would release was definitely not ideal for little ones.

In the 1950s, toy guns could be standard fare at stores and for excitable kids. So, manufacturers got creative to make their stand out. Enter the Austin Magic Pistol, a firearm featuring gas-powered combustion that actually used “magic crystals” better known as calcium carbide, which was, in fact, hazardous.

All that’s not to mention the fact that when the crystals came into contact with water, they would send the plastic ball firing off 70 feet or more. Because of its dangerous nature, the gun ended up classified as an actual firearm in several states, which made it fall under more restrictive distribution.

The M80! We called them cherry bombs back in the day. I honestly can’t believe they were ever legal, as the bang they produced was nothing to joke about! Luckily, my brothers and I who played with them during long summers returned to school with all of our fingers in tact! So that’s a win!

It was good fun to explode anything we could find! A tennis ball, a tail pipe, an old shoe! We would put m80s in old radios and watch it shred!

The games in the links above are certain not the games taken away from us or banned from children. These were the treasured games. The ones we look back on and wish we still had or were still living in the days where we would sit around with our friends and play with toys rather than electronics.