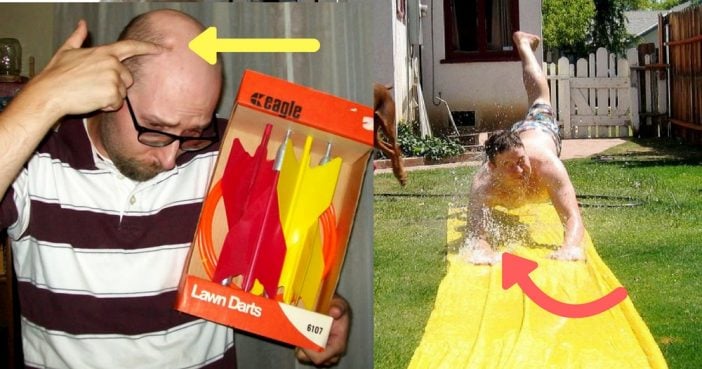 There’s a reason they don’t make really tiny toys any longer, and it isn’t because they ran out of tiny tools: kids put stuff in their mouths, noses, and ears when they shouldn’t, and people get hurt.

Because of this, many toys that were once considered absolutely fine for the market have been recalled over the years, while others had shoppers muttering “what were they thinking” as soon as they hit the store shelves.

If you thought your kid could do with a new hobby and needed some new glassware around the house, then the Gilbert Glass Blowing Kit was for you! This terrifying toy was marketed as a necessary device to help children learn a valuable skill. When it was released in 1909, glassblowing was something of a practical skill needed for people interested in studying chemistry in college. That’s all well and good, but we are talking about giving children a device capable of heating up the included glass tubes with an alcohol-fueled flame.

The set came with 80 experiments children could conduct to learn the basics of scoring, blowing, and shaping glass objects. It was clearly more dangerous than your average stuffed animal and would never be sold to children today, but it sure looks like a lot of fun. For some reason, the kit was marketed only to boys, which may have spared many a young lady from burning herself on her homemade glass cup since the kit didn’t come with any protective gear at all. It encourages children to use their bare hands when working with glass at approximately 1,000 degrees Fahrenheit. Can you imagine yourself at that age not burning down the house? We can’t.

The Austin Magical Pistol is one of the most desirable collectibles in the vintage toy market, but it was also one of the most dangerous ever marketed to children. On the surface, the gun fired ping pong balls, and that’s not dangerous, is it? Well, it depends on how you shoot them off. Nowadays, you might find a spring-loaded gun to fire these harmless balls across a room, but back in the 1940s, they gave kids some calcium carbide and let them go to town. Calcium carbide and water don’t get along too well, so kids would spit into the barrel and throw in a ball, resulting in a brilliant fireball and the launching of a ping pong ball at your little sister’s face (nobody really aims for those paper targets when they have a kid brother or sister).

Other than the obvious concerns of providing dangerous and explosive chemicals to a kid, the gun’s breach was barely screwed on and would blow off, scorching the face of the poor kid firing it with acetylene gas. That’s probably not something the toy makers were looking for back then, so the toys didn’t last long on the market, making them harder to find for collectors (that was partly due to them exploding all the time). These days, most states classify the Austin Magic Pistol as a firearm since it uses a chemical explosion to shoot off a projectile, so collecting them might require a background check depending on where you’re from.

The Gilbert Company was all about making toys and kits for children to become supervillains when they got older … at least that’s our theory. Their Atomic Energy Lab was exactly what the name implies. The kit came with a Uranium-238 Geiger counter, a Wilson cloud chamber, a spinthariscope, electroscope, and four samples of uranium ores. Yes, you read that correctly: the kids got a hold of uranium-238, which is radioactive. And though it’s not fissile by itself, it is used to make plutonium-239 (the main ingredient used in atomic weapons). Of course, kids weren’t putting together little Manhattan Projects in their garages with these samples. No, they were getting cancer.

U-238 has been linked to everything from leukemia to lymphoma and Gulf War Syndrome. It’s not something that should be handled lightly and it should never be put into the hands of children who just want to learn about atomic energy.

This set was released back in 1950, five full years after the only two atomic bombs were ever detonated during warfare. You would think Gilbert might have looked up the dangers of the stuff. The kit was pretty expensive. It cost around $350 in today’s money, so few people bought it for their eager young supervillains, and it was discontinued after only two years.

Toy manufacturers are often on the lookout for a product that puts a new spin on an old idea. The Moon Shoes were just such a toy, and the product they took inspiration from was the trampoline (you know, that thing that causes around 100,000 injuries every year). On the surface, these seem rather benign. They are small trampolines made of rubber bands kids wear on their feet so they can jump a few inches higher, making it feel like they are bounding about on the surface of the Moon like real astronauts. Of course, nobody who ever set foot on the Moon broke their ankle walking around up there, but that’s exactly what happens when you strap a couple of trampolines to a kid’s feet and set them loose.

Injuries aside, these things had the best warnings of all time in the instruction manual. Kids were warned against jumping indoors and especially on their beds to achieve a “double jump” effect because you know some kid tried to do exactly that. They were told to only use them outside and on hard, flat surfaces like a driveway or blacktop—great places to fall and break an elbow or an ankle. Moon Shoes were first introduced in the 1950s and were made of metal,  so it’s a wonder they thought it wise to bring them back in the 1990s to a much more litigious society.

Kids like dolls and they also like helicopters, so Galoob Toys Inc. married the two ideas together and created a series of dolls called Sky Dancers in the late 1990s. These dolls were placed on a decorative base and spun rapidly at the pull of a string. Their loose arms spread out, and since they were in the shape of propeller blades, the Sky Dancers would zip up into the air and majestically fly right into your father’s face, blinding him.

That’s not a joke. The dolls would fly, yes. But they did so erratically, and just like grapefruit juice, it tended to shoot into someone’s unsuspecting eyes. The company received 170 reports of the dolls hitting people, causing eye injuries such as scratched corneas and temporary blindness. And then there were the other injuries—wounds that needed stitches, shattered teeth, a broken rib, and even a concussion.

Perhaps a little more product testing might have revealed that small plastic dolls flying erratically through the air within a person’s home were a bad idea.

You might have seen slap bracelets — they were all the rage in some schools in the early ’90s. They were cool, kinda weird-looking, and you literally put them on by slapping them onto your skin. Talk about badass — you’re slapping yourself. But of course, they were taken out of schools pretty quickly because they were dangerous. The slapping wasn’t the problem, it was the bracelet itself.

The bracelets were a flat strip of metal covered with colorful fabric or paper, but the edge of the metal could rip through the coverings after enough uses. This would leave a sharp metal edge exposed – a schoolyard shank, basically. Schools were wise to intervene and slap these bracelets with restraining orders.

Page Page 1 of 3
Previous article: Tell Us Who this Young Stud is?
Next Post: The 15 Most Beautifully Touching Love Letters From Celebrities And Historical Figures