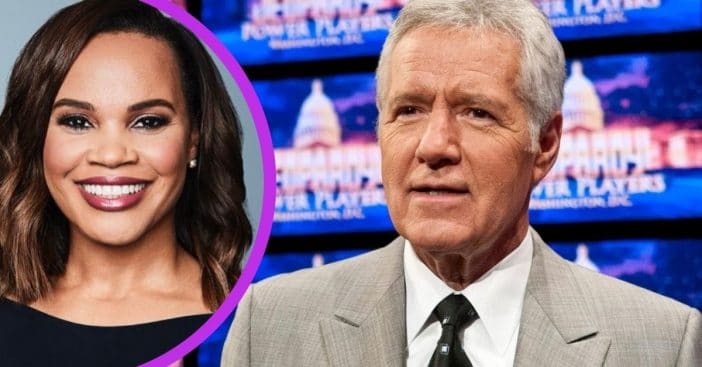 The future of the Jeopardy! host role is still up in the air. Mayim Bialik remains as a co-host for special times, but with mike Richards gone from the position, the role still needs to be filled. Last year, when asked to name someone he’d like to see as female host, Alex Trebek jokingly suggested Betty White, “Because they want somebody younger, somebody funnier.” Even before this, though, he had another suggestion: Laura Coates.

An old interview is making the rounds once again, and fans are reacting strongly

Following the death of Alex Trebek, Jeopardy! cycled through a series of guest hosts for varying weeks. They included Jeopardy! GOAT Ken Jennings, veteran journalist and first female guest host Katie Couric, Aaron Rodgers, Dr. Oz, and the highly anticipated LeVar Burton. Who was not included in this list was Trebek’s suggestion of a female successor, Laura Coates. Additionally, Faust and Mankiewicz were not in the co-host schedule as well.

On Twitter, the TMZ interview is recirculating, in which Trebek names Coates as one of his picks to take over Jeopardy! One post, which has over three thousand likes, asked, “Alex suggested @thelauracoates …why hasn’t she gotten a chance to guest host?” The user posed this question back in March, and Coates remained absent from the guest host schedule since then. In the replies, one user noted, “people are acting like Alex Trebek was in charge. He did not have the final say. Do you get to pick your successor at your job?” In response, another comment replied, “No, but it would have been respectful to at least have his expressed choices given a chance to try out.” And that’s where the renewed grievances come in.

Incredibly honored & humbled @Jeopardy Alex Trebek 1) knows who I am 2) thinks I'd be a great host of my fave game show ever that I grew up watching w/ my family & still watch w/ my own kids (who saw him say this & now think I'm a genius) #Dying https://t.co/qdMxWc9g5e via @TMZ

When she heard what Trebek had said about her, Coates tweeted, “Incredibly honored & humbled @Jeopardy Alex Trebek 1) knows who I am 2) thinks I’d be a great host of my fave game show ever that I grew up watching w/ my family & still watch w/ my own kids (who saw him say this & now think I’m a genius).”

Elsewhere, Jeopardy! viewers want to know why Coates never got a shot at at least guest hosting – or more. “I would really like to know why Alex Trebek’s choice, @thelauracoates never even got a shot,” writes one user. Another stated, “How is everyone forgetting this fact?? Alex wanted Laura Coates,” and an additional post echoed the sentiment with, “She probably would’ve been an excellent Jeopardy host. Alex knew.”

Would you liked to have seen Laura Coates in the guest host lineup?

Click for next Article
Previous article: After Sharon Osbourne And Carrie Ann Inaba Leave ‘The Talk,’ Another Host Announces Departure
Next Post: Actress Rose McGowan Has Some Harsh Words For Oprah Winfrey