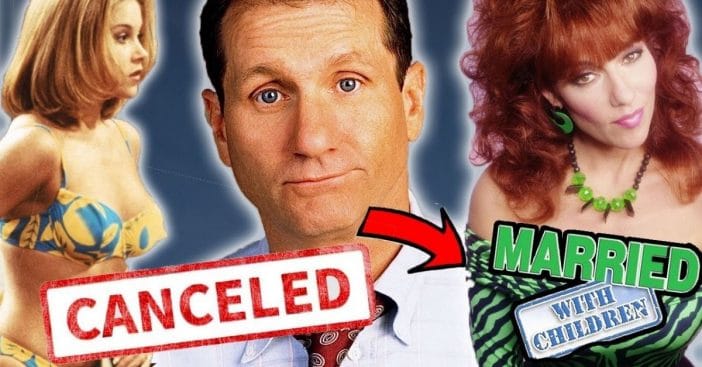 If there’s one thing Married with Children taught us it’s that love and marriage go together like a horse and a carriage! Well, ole’ Frankie blue eyes taught us that, each week with the theme song. The actual show was a bit different. Try and separate the sitcom from its risque premise, and you wouldn’t really have the show at all.

So just how did we get the most memorable sitcom that pushed all the boundaries? Turns out, a lot happened behind the scenes. And although this show put a network on the map, some episodes were too racy to make. And haters of the show had a part in saving the series.

Ed O’Neill’s gruff lewdness and Katey Sagal’s long-suffering sarcasm feel practically synonymous with the show. But these things don’t materialize in their final form right away. When show creators Michael G. Moye and Ron Leavitt pitched their sitcom idea, they envisioned Sam Kinison and Roseanne Barr as Al and Peggy. Kinison Famous for his loud, charismatic preaching, and for building a friendship with Robin Williams and Jim Carey via stand-up at the Comedy Store. And Roseanne Barr the other side of the crass coin who at the time was a rising comedy star. Both told the show creators they were aiming for movie roles, though Barr would get her own sitcom just a year after Married with Children debuted.

Michael Richards is famous for his wacky entrances and mannerisms as Jerry’s neighbor Kramer on Seinfeld. However, years before, he auditioned to play Al but didn’t quite fit. Instead, the showrunners happened to see Ed O’Neill play Lenny in a Hartford production of Steinbeck’s Of Mice and Men. Additionally, O’Neill did something special. 80% of men who auditioned played Al like Jackie Gleason from The Honeymooners, and 20% acted like Jack from The Shining.

O’Neill put his own special twist on Al by sighing and slumping his shoulders before going into his home. And the sheer dejection as he entered won him the role.

No one ever saw the unaired pilot, but we had some different Bundys. Originally, Tina Caspary played Kelly, and Hunter Carson played Bud Bundy. Of course, Christina Applegate and David Faustino took on the roles permanently, which rounded out this perfectly imperfect family.

It’s 7 in the evening on April 5, 1987. It’s Sunday, so a full work week is just around the corner. However, on TV, something historic is occurring. Fox makes its primetime network debut with a new sitcom: Married with Children. Partnered with The Tracey Ullman Show, which got replayed again at 9 pm for those who were putting the kids down at 7.

The Gall of Sagal

Just as Archie Bunker had Maude to keep him in check, Al Bundy had Peggy. However, instead of keeping each other in check, it’s an endless feedback loop of humanity’s worst vices.

Peggy doesn’t make life easy for Al, like a sheer refusal to cook or clean or… do a lot of things. That was all the more absurd thanks to Katey Sagal’s genius ideas for her character.

Sagal had the idea to dress Peggy like a parody of a 1960s housewife. For her audition, Sagal came in with her own bouffant wig and ’60s waitress attire. The producers loved it, and the look was completed with Capri leggings, a clunky belt, and skinny heels.

The budget didn’t allow for a dedicated wig for three whole seasons, so before then, Peggy stayed a brunette.

When “children” is in the show title, you know what you’re getting. And Katey Sagal’s real-life pregnancy highlighted this, as showrunners worked it into season 6, but sadly, Sagal miscarried.

The show even addressed this sudden loss, by calling it all a nightmare that Al had. Sagal became pregnant two more times during the show but decided to go in the ‘mask the growing stomach’ angle instead of embracing it.

Some of the most iconic pieces of entertainment history had pretty rough starts. Mash was 46th in ratings for season 1 before climbing to 4th for season 2. The Addams Family only lasted 2 seasons and became more popular as time went on. Married with Children was no exception. In fact, during the first season, David Faustino went to a crowded mall wearing a shirt with the show’s logo and no one approached him. But don’t worry, divine power was looking after the sitcom. Beer? No. A hater.

Family Values activist Terry Rakolta was so disgusted by how raunchy and immoral the show was, that she started a campaign complaining about how the series would corrupt the American family. Specifically, she was appalled by the episode “Her Cups Runneth Over,” full of lingerie, crude humor, and unsolicited groping. Turns out, her complaints got a lot of news coverage. This brought fresh eyes to the hysterical dumpster fire that was happening over on Fox. Oh, the power of free publicity.

Do you know who was a fan of Married with Children? Bond, James Bond. Well, technically Sir Roger Moore, but the same thing. He called it a guilty pleasure, plus he had to support Katey Sagal, daughter of the late director Boris Sagal and one of Moore’s friends.

Amanda Bearse, who played Marcy, had a few things in common with her character. The biggest was that she and Ed O’Neill didn’t get along swimmingly in real life. They respected each other but by season 3, they stayed apart as much as possible due to frequent arguments. When Bearse came out, O’Neill supported her again but neither he nor David Faustino was invited to the wedding. Bearse stated that she was afraid they would laugh at the sight of two women in tuxedos, and O’Neill has confirmed that he probably would have done so.

Some battles happened on-set too. For example, between Katey Sagal and Buck the dog, who kept trying to make some unwanted moves on Sagal’s leg. It got so bad, producers were ready to fire Buck and the owner.

Too Hot For TV

Former President George Bush once told Americans to be like The Waltons. What he also could have said was don’t be like the Bundys. Al and Bud could be a tag team of taboo behavior, between groping women, fondling mannequins, Al’s rivalry with feminists and gay people. Even during its premiere, the show raised a few eyebrows, but others watched for the scandalous behavior.

And once, Fox even put its foot down for the season three episode “I’ll See You in Court.” Originally planned for the 1989 season, but necessary censor tweaks pushed it all the way to  2002. Some countries received an uncut version of the episode, in which the Bundy parents try and shake up their love life at an inn that made recordings of people being intimate, including the Bundys and the Rhoades.

Let’s set the record straight. One very popular myth stated that Al’s last name came from the infamous serial killer Ted Bundy. In reality, the Bundy show creators were nodding to pro wrestler King Kong Bundy, who actually had two appearances on the show: first as himself, then as Uncle Irwin.

The Rhodes got the same treatment, named after another pro wrestler, Dusty Rhodes.

Speaking of tie-ins with other famous icons, watch the opening credits and you’ll see cars driving on the interstate. That clip is taken directly from National Lampoon’s Vacation, and you can even see Griswold’s station wagon.

As for Marcy D’Arcy’s name, that’s inspired by the name of Marcy Carsey, producer of The Cosbys. When Married with Children was still in its early days of production, its working title was Not the Cosbys. The goal was to create a sitcom family that was not as polished or idyllic.

The series delivered a whole lot of laughs and memorable mishaps. It’s hard to believe a show like this came to exist and it’s serendipitous that the haters would be the ones to help save it. What was a great episode of this honest comedy? Do you know a piece of trivia that we forgot?