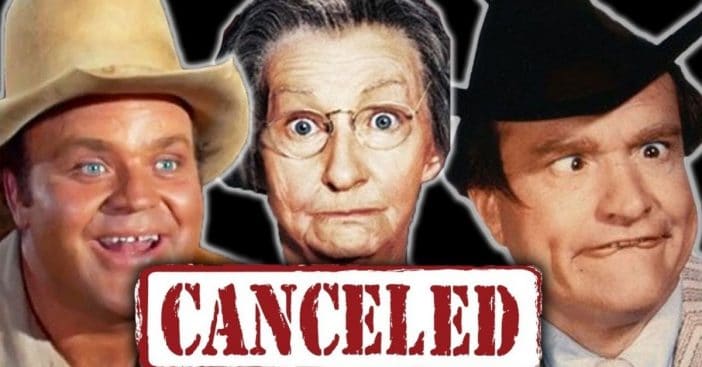 If you were watching TV in the early ’70s you might have noticed a worrying trend. Your favorite TV shows, or at least the ones in a rural setting, started disappearing one by one. Bonanza, Petticoat Junction, immensely popular programs were suddenly gone. Why were all these iconic shows, many of whom still boasted sky-high ratings, unceremoniously dumped? Well, like most things in life, you gotta follow the money. While these rural-themed shows did have millions of viewers each week, their audiences skewed overwhelmingly older. And advertisers weren’t exactly happy about this. Because who buys the most refrigerators in this country? Not cute little grandma settling in to watch Lassie.

People aged 25-35 are the demographic that advertisers covet, and these young people just weren’t watching country-centric shows. So under great pressure from the bigwigs with the moneybags, the tv studios, especially CBS, caved, and what became known as the rural purge commenced. Today we’re looking at the best shows to fall victim to the rural purge. Be sure to hit the thumbs and subscribe to our channel, but now, let’s get purge-y.

The first show on our list might be the most surprising because The Beverly Hillbillies was one of the most popular shows of the 1960s. The iconic rags to riches story tells the tale of the Clampett clan from the depths of the Ozarks. After oil is discovered on their property, the family becomes millionaires overnight and hightail it to Southern California. Of course, these hicks don’t know much about city livin’, and their fish-out-of-water situation leads to much hilarity. Which audiences loved.

At one point during its run an astonishing 57 million people a night tuned in to watch the hijinks of Jed, Jethro, and co. But even being rated in the top 20 tv shows for eight of its nine seasons wasn’t enough to save The Beverly Hillbillies, and in 1971 the Clampetts got the ax.

No, not Lassie! Surely the purge wouldn’t be heartless enough to cancel the cutest animal on TV. Well, the purge has no feelings, my friends, and cares nothing for your sentiments. Lassie was a modern fairy tale that followed the adventures of the eponymous Rough Collie and her companions, both human and animal. Generally, someone would get into a bit of trouble, such as falling down a well or being cornered by a bear, and Lassie would rush in to save the day. There was invariably a happy ending, with all problems solved in an easy 22 minutes. By the early ’70s, Lassie had been on the air for more than a decade and a half and the show is still the fifth longest-running U.S. primetime television show in history, but even that fact was no match for the mighty purge, and by 1973 the beloved Collie was off the air.

Ah, Mayberry, NC. The most idyllic small town in America. Where Andy Taylor patrolled the streets keeping everyone safe. America fell so in love with Mayberry while watching The Andy Griffith Show that even after Griffith and on-screen son Ron Howard left the sitcom, millions of people tuned in to watch the show’s spinoff, Mayberry R.F.D. which kept Andy Griffith’s premise, that of a widower raising a young son, and most of the original townspeople also made appearances.

The piggyback helped Mayberry become a massive hit right off the bat, and all three seasons of the show were popular. But the purge comes for us all in the end, and even quaint little Mayberry was not immune. Mayberry R.F.D. was canceled in 1971, and America was no longer able to peer into the lives of this small-town utopia.

Also existing in the extended Beverly Hillbillies universe was this popular late 60s sitcom. Petticoat focuses on the rural Shady Rest Hotel, which is run by widowed Kate Bradley and her three daughters, Bettie Jo, Bobbie Jo, and Billie Jo. The women have to deal with the shiftlessness of their lazy but likable Uncle Joe and try to keep the Hooterville Cannonball, an 1890s vintage steam-driven train run more like a taxi service, from being shut down. Petticoat Junction took place in Hooterville, the same fictional town that another hit rural sitcom, Green Acres, also took place, and characters from The Beverly Hillbillies also made appearances at the Shady Rest Hotel. But despite this interconnection and good ratings, Petticoat Junction fell before the might of the purge and was canceled in 1970. But if you want to take the Hooterville Cannonball down to the Shady Rest, we have a great deep dive for you to check out.

If there was any show that might have escaped the jaws of the purge you would think it would have been Gunsmoke – and the iconic western drama almost did just that, lasting past some of its rural brethren all the way till 1975. Gunsmoke focused on Marshall Matt Dillon as he tried to keep the peace in Dodge City, Kansas during the wild west era. The show was different from every other western at the time – it had a darker tone and strove to show the realities of life on the frontier, not some gussied up, sanitized Hollywood version. And boy did audiences love it, and love it for a very long time.

By the time the purge caught up with Gunsmoke, the show had been on the air for 20 years, at that time a record for a primetime scripted drama, and had 635 scripted episodes, a record only very recently passed by The Simpsons. Gunsmoke started in 1955, and only three shows that premiered in the 1960s were still on the air when it was canceled. During its run 30 other TV westerns went on the air and subsequently disappeared. But the purge is almighty, and eventually, even Gunsmoke had to go.

After The Beverly Hillbillies struck oil in the ratings, show creator Paul Henning went right back to the country for more, creating Petticoat, and then finally in 1965, Green Acres was born with Paul serving as casting director and executive producer. And following its sister sitcoms, it became a massive hit. The sitcom follows the adventures of wealthy New York Attorney Oliver Douglas and his glamorous wife Lisa after they abandoned the glitz of the big city and bought a farm in the middle of nowhere. Hooterville, to be exact, which is also the setting for Petticoat Junction. While most of Green Acres is pretty standard 1960s sitcom fare, the show was unique in that it incorporated elements of surrealism and satire, with running jokes, recurring visual gags, and the characters repeatedly breaking the fourth wall. It was also the first sitcom in which the theme’s lyrics were sung by the show’s two leads (beating The Monkees by just one year. Despite these more modern elements of storytelling, Green Acres was swept along in the tsunami that was the rural purge and was canceled in 1971.

Anyone who watched TV in the ’60s and early ’70s can hum the theme song from Bonanza. The immensely popular western focuses on the Cartwrights, a family of bachelor cowboys who run a ranch in the vicinity of Lake Tahoe. The show was atypical at the time for a western, as the plot rarely focused on the west, and was more often about how father Ben, and his three very different sons Adam, Hoss, and Little Joe cared for one another. The show was also unusual for the ’60s in that it tackled the difficult social issues of the day. In various episodes the show tackles antisemitism, the struggle for immigrants to assimilate into American society, and interracial marriage, taking a very progressive view each time. Despite these forward-thinking ideas, however, Bonanza was not able to fight off the purge and was canceled in 1973. Luckily for you, the purge can’t cancel DoYouRemember, and we have a great throwback to revisit the Cartwright Clan.

There they are, some of the most iconic shows of all time, that were all shelved before their times by greedy advertisers looking to sell more products. The rural purge stole from us some of the most beloved tv shows of all time, so I guess we just have to be thankful for reruns. How many of these shows did you used to watch? Were you shocked when any of them were canceled? Or had they run past their heyday? Let us know in the comments below, we read every one!