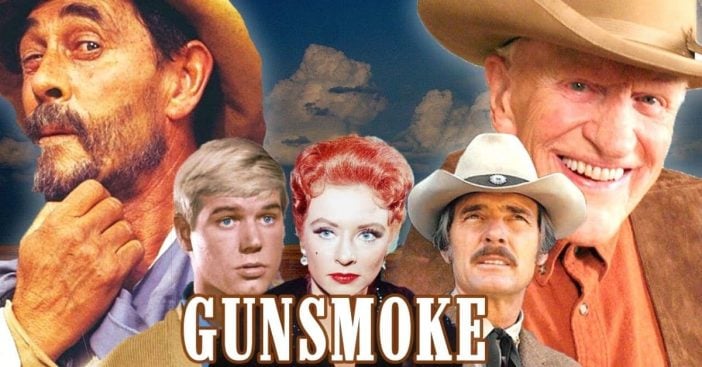 Alright, let’s get the Hell into Dodge! Mount your horses and get ready for a wild ride, because today we’re revisiting Gunsmoke, the sweeping western drama that’s been called America’s own Iliad and The Odyssey. For two decades, from 1955 to 1975, Gunsmoke, which started out as a radio show, was appointment television for families around the nation.

The TV version was slated to be canceled in 1967, but when President Lyndon B. Johnson reportedly told CBS he was a fan, they had to reevaluate. Moving the show from Saturdays to Mondays had adverse effects for The Skipper and Company, resulting in the cancelation of Gilligan’s Island. Let’s take a look back at the cast of Gunsmoke, then and now.

Hold it, it’s time to talk about The Marshall of Dodge City, Matt Dillon, Justice incarnate. He certainly evolved throughout Gunsmoke. Initially Arness based The Marshall off his radio counterpart, but since Gunsmoke was America’s longest-running action show until Law and Order, Arness had plenty of time to mold the character into his own. Marshall Dillon understood his job would involve violence and grief, but never lost his compassion and fairness. But even after he learned to find peaceful answers, Dillon did what was necessary. For this, he became relatable and admirable. Arness himself would do whatever it took to achieve his goal! First, after recovering from serious injuries he obtained overseas in WWII, he hitchhiked his way to California and began scoping out agencies and casting calls.

RELATED: Whatever Happened To Dennis Weaver, Chester Goode From ‘Gunsmoke’?

He quickly became a staple of the western genre and great friends with John Wayne himself. In fact, Wayne recommended Arness personally for the role of Dillon. And while most of us know him best as the Dodge City Marshall, Europeans recognize Arness first as the character Zeb in How the West Was Won. It became something of a cult classic across western Europe.

A transplant from Minnesota, Arness adapted to California life swimmingly, his favorite hobby becoming surfing. Beachgoers could spot the 6’1″ Marshall Matt Dillon hanging up his holsters and enjoying some tubular waves. Arness had the unique pleasure of playing Marshall Dillon in five separate decades: ’55 to ’75 for the weekly series and reprising the role for TV Movies in the ’80s and ’90s. All that hard work earned him a Hollywood Walk of Fame star, which now honors the late legend who passed in 2011 at the age of 88.

Every Marshall needs a right-hand man, and Matt Dillon could count on Chester Goode. A devoted friend and partner, Weaver’s Chester walked with a limp. Why? Because Weaver looked too much like the lead character, even next to James Arness. Rumor has it that they would place a rock in his boot making his limp more authentic. Ouch.

Dennis Weaver stayed with the show for nine years before he started chafing creatively. Weaver worried he’d never get away from the character. And in 1964 finally shed the limp and went from a sidekick to a leading man, in NBC’s Kentucky Jones. The show didn’t last long, but it gave Weaver a taste of success and independence he’d thirsted for. In 1971 he starred in Steven Spielberg’s TV movie Duel, and he starred in the title role of McCloud from 1970 to 1977. Before and after retirement, Weaver was an environmentalist. He promoted care for the ecosystem for decades until his death in 2006 at 81.

A lot of business goes down at the saloon and that’s where Miss Kitty Russell comes in. For almost two decades, Blake played everyone’s favorite sassy redhead with a heart of gold. Miss Kitty and Matt Dillon were part of one of the first and longest-running “will they / won’t they” relationships to the point the show made fun of it. Amanda Blake was so iconic that the National Cowboy and Western Heritage Museum inducted her into the Hall of Great Western Performers.

Her personal life was a bit less of a steady success story. She was married four times, but while married to her third husband, our saloon proprietress became famous for — what else? — being one of the first to successfully raise cheetahs in captivity. In fact, Blake entered semi-retirement early to focus on animal welfare. Unfortunately, her own health took a turn for the worse and she died in 1989 when she was just 60 years old.

The doctor is in the house! Doc Adams, specifically. Someone had to patch up our rugged heroes after all the scraps they settled (or started). Doc was a testy curmudgeon who stayed on the show for most of its duration. Stone comes from a whole family of artists: his cousin is character actress Madge Blake, who played Mrs. Cooper in nearly 100 episodes of Adam West’s Batman; and his brother Joe actually wrote two episodes of Gunsmoke, Baker’s Dozen in ‘67 and The Fugitives in ‘72.

Now try to picture Doc in a barbershop quartet, because that’s exactly where Stone started off before heading to Broadway. Gunsmoke fame came very late in his career — and life — so Stone wrestled hard with CBS to make sure he received royalties. All that insisting paid off; Stone stuck with the show until it ended in ‘75, after which he was finally able to retire and enjoy the fruits of his labor. Although it is sad to say it lasted only five years before Stone died at 70, which is why Doc was not present in any of the Gunsmoke reunion films.

Festus Haggen served as a structural replacement for the departure of Chester Goode. Haggen brought something else to the deputy job: friendship and humor. The tough yet bumbling companion provided great amusement with his verbal feuds with Doc Adams. You ole Scudder! Curtis and Arness had plenty of time to bond early on, as Curtis had a few different roles in Gunsmoke before settling into Haggen permanently in season 8. Out of the Marshall’s five deputies, Festus held the title the longest, with a whopping 11 years under his floppy hat.

After Gunsmoke, Curtis loaded up some more westerns, including 1983’s Sam Elliott led The Yellow Rose. If you haven’t seen that nighttime soap, check it out — it’s got one heck of a cast. He continued acting until he died at 74 years old in 1991, but his image lives on in a Festus Haggen statue in Clovis, California, where Curtis spent his later years.

There are few people whose bad side we never want to see less than Newly O’Brien. He wasn’t just a deputy, he was once a gunsmith, so the man knew a thing or two or 10 about firearms. Buck Taylor was a frequenter of westerns, but Dallas fans will also recognize him as Detective Bussey. In 1987, he returned to Dodge — literally — in Gunsmoke… Return to Dodge.

Only this time, he played the city’s Marshall. What a promotion! But this rugged gunsmith-turned-deputy-turned-marshall has a soft side, too. In fact, he paints! He’s been selling his work since 1993. From 2018 to 2020 he played Emmet Walsh on Yellowstone. He’s now 83 years old.

Time to kick your feet up after a hard day in Dodge. Who better to see on the other side of the bar than Sam Noonan, resident bartender? Level-headed Sam walked into the bar first in Season 6 and was on the show until his death in 1973 at age 74. When you’re dealing with gunfights and bar brawls, you need a solid voice of reason, and that was definitely Sam, who’s seen quite a bit. That made Strange perfect for the role and he was also great as the murderous Butch Cavendish in The Lone Ranger.

Throughout his career, Strange appeared in over 300 projects, but his biggest role besides Gunsmoke was monstrous. Strange’s facial features and towering 6 ft 5-inch height made him the perfect Frankenstein’s monster in House of Frankenstein (1944), House of Dracula (1945) and Abbott & Costello Meet Frankenstein (1948). He even received coaching from horror movie icon Boris Karloff, who originated the role in 1931. The duo became so well-known that when Karloff died, the New York Times put a picture of Glenn Strange as Frankenstein’s monster instead of Karloff. Oops! But it was a nice accidental tribute. Even though Strange died in 1973, his Gunsmoke co-star Buck Taylor actually named his son after him to keep his memory alive. That’s when cast really becomes family.

We can’t leave off Burt who played Quint Aspen, the half-breed blacksmith who could always win a fight, even without a pistol. He was part of the Dodge Community for Seasons 8-10 and although you don’t need any reminder, Burt was a standout in roles from Smokey and the Bandit and Deliverance, among many others. Reynolds passed away in 2018 at the age of 82.

This has been quite the return to Dodge. There’s no forgetting the thrilling shootouts, tense chats, and amazing relationships we got to form thanks to this quintessential western. Who was your favorite character from this enduring show? Do you remember a specific episode that you loved? Let us know in the comments; we want to hear from you!