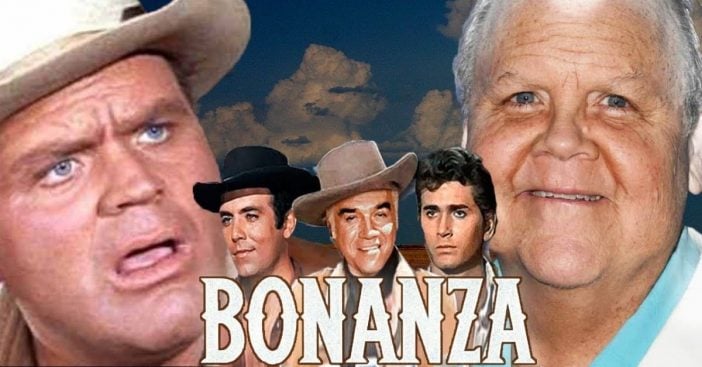 Shows don’t come more than that of Bonanza. Set during the 1860s, this show could give audiences some lighthearted laughs and confront them with serious topics seamlessly. Sunday evenings showed Americans a family they could get inspiration from. And behind the powerful legacy of Bonanza was a powerful cast. But where are they now? We’re going to jump right into things here…

The Cartwright family lived in Virginia City, Nevada, though sometimes they also appeared in the age of dinosaurs thanks to an episode of The Flintstones.  And through it all, they made television history by confronting racism and showing an interracial marriage. To this day, Bonanza is the biggest show credit on a lot of these people’s lists. But the cast still got up to some truly remarkable work after the fact, and although many of them are long gone now, they still deserve to be celebrated. So, let’s explore that subsequent work right here.

In a show with a lot of horses, Lorne Greene stands out as the busiest workhorse of all. He was one of the few cast members who appeared in every single episode of Bonanza. For reference, that totals up to 431. Thanks to his performance on the show, and Bonanza‘s overall impact, Greene really had to appear as often as possible. No one wanted to miss a chance to see TV Guide’s 2nd Favorite Dad. But Greene stimulated the show’s success behind the scenes as well. When the Cartwrights started as rude to guests, Greene suggested making them more welcoming, especially since their business served the greater community. They tried his change out and popularity soared.

RELATED: Bonanza – 50 Things You Never Knew About The Cast And Production

Bonanza is considered a western and even after the show ended, Lorne Green did not leave the genre. Instead, he went on to use his fame as Ben Cartwright to promote his own musical career creating country-western and folk albums. His spoken-word ballad, “Ringo,” actually reached number one in the music charts.

He finally did jump genres with the science-fiction TV series Battlestar Galactica in 1978. There, Greene once again played a patriarch, Adama, who lead a motley crew of survivors fleeing war with robots and reptiles. When it came time to live a quiet life away from oil country drama and space battles, Lorne Green went on to host the Macy’s Thanksgiving Day Parade with Betty White herself. The two made a very memorable pair and enjoyed a lot of fun banter together. Sadly, Greene passed away in 1987 from pneumonia. He was 72 and left behind a legacy that transcended time and space.

Born on May 18, 1928, Pernell Roberts played the eldest Cartwright boy, Adam. With the character’s architectural savvy and university education, Adam had a lot to be proud of. But Roberts didn’t share that pride. He looked at Bonanza and felt it wasn’t living up to its fullest potential. Robert Reed would share that opinion over The Brady Bunch, too. For Roberts, the show felt less like a labor of love and more like something on an assembly line. Additionally, he felt bothered by Adam’s need for his father’s approval even well into adulthood.

As a result, Roberts left the cast of Bonanza about halfway through the series. His wishes took him to the stage where he could pursue storylines that held more social impact and weight. Outside of work, he put his preaching into constructive action by participating in the march from Selma to Montgomery.

Just a decade after departing from Bonanza, Roberts became part of the cast of M*A*S*H, sort of, by extension. The show’s spinoff series, Trapper John, M.D., had Roberts as the title character. It proved very popular, aided by the fame of its predecessor while also adding to it. Outside of work, Roberts went through wives as he did big series, marrying four times in total. Then, in 2010, Roberts died from pancreatic cancer at the age of 81. Rest in peace.

No one else could have played the “big, friendly man” of Eric “Hoss” Cartwright than Dan Blocker, standing at 6 foot 4 inches and weighing 300 pounds. As part of the Bonanza cast, all Blocker had to do was tap into his own Texan-born likability and he was Hoss. Born in De Kalb, Texas, Blocker was the heaviest baby born in Bowie County, weighing 14 pounds at birth. It should be no surprise, then, that one of Blocker’s first gigs came as a rodeo performer while he was still a student. He broke into slapstick thanks to a Three Stooges short where he played Goon/Zombie.

Quickly, though, his physicality and roots made him perfect for several westerns. He joined the cast of Gunsmoke and Cheyenne; however, Bonanza remained his most enduring – and his final role. After some 400 episodes, Blocker died suddenly in 1972 from a pulmonary embolism during a post-op procedure. The big, friendly man named Hoss was just 43. However, some of his legacy lives on both through Bonanza and his son, Dirk Blocker, who is on Brooklyn Nine-Nine as Detective Hitchcock.

The life of Michael Landon was incredibly eventful before, during, and after joining the cast of Bonanza. He endured harsh challenges from his own mother’s bullying and death threats. But Bonanza helped the then-22-year-old Landon become a television icon on screen and behind the director’s camera. In fact, Bonanza taught him a lot about acting, writing, and directing. So, Landon used this knowledge to try his hand at it himself on-set.

The results turned out superb. Some of the most beloved episodes came from Landon’s craftsmanship, including the season 14 opener, “Forever.” After Bonanza, Landon went from endearing son to iconic patriarch as Charles Ingalls on Little House on the Prairie. There, he continued making a TV show a cultural staple of television – though not without some pranking, too.

On a personal level, Landon had several rocky relationships. He married Dodie Levy-Fraser for six years. He met Marjorie Lynn Noe while acting, the first time he’d meet a future spouse through work. Then, they broke up when he began an affair with makeup artist Cindy Clerico. Though he made some of this family through infidelity, Landon tried to assure all children he considered them his family – even if they weren’t his blood. Indeed, Landon networked a lot and found friends in the likes of Johnny Carson who he broke news of his cancer diagnosis to. This let him stay ahead of the tabloids. Unfortunately, though, he succumbed to pancreatic cancer in 1991 at the age of 71.

As a character actor, Ray Teal fully embedded himself into the Western genre to the point he became synonymous with it. Over the course of his career, he’d essentially become Sheriff Roy Coffee from Bonanza: experienced, enduring, irreplaceable no matter what. As part of the Bonanza cast, Teal portrayed a man that proves experience is the best teacher.

As someone who accumulated 300 credits to his name, Teal’s success wasn’t limited to Bonanza, though it definitely helped his name recognition. Still, though, he also gained a lot of fame thanks to Kirk Douglas’ Ace In The Hole. There he played – just guess – a sheriff as well. His role in Marlon Brando’s The Wild One proved a little more laid-back than a keeper of the peace; there, he played a rather indulgent bar owner. After cementing a sprawling legacy, Ray Teal passed away in 1976 at the age of 74. Rest in peace.

When Pernell Roberts left the show for something more meaningful for himself, Guy Williams joined the Bonanza cast. There, he played Ben’s nephew, Will Cartwright. This actually allowed the show to preserve its four Cartwright format smoothly. Additionally, Williams joined after coming off the stellar fame as the titular character of Zorro from the show.

Reportedly, Landon didn’t like having competition in the cute department and rumor has it he had Williams booted from the show. Don’t worry, though. He had plenty of success even after this casting debacle, playing the father of the Robinson family on the smash hit, Lost in Space. By the 1980s, Williams was able to enjoy early retirement to Buenos Aires before dying from a brain aneurysm in 1989.

Don’t ever dare to arrive late for dinner when Victor Sen Yung’s character is the chef. Hop Sing brought a lot of important levity and representation to the cast of Bonanza and became half of one of the first interracial marriages seen on TV. A bit before this Lucille Balle and Desi Arnaz had made history thanks to their multi-ethnic relationship. Hop Sing’s marriage still stood out, though, as did Victor Sen Yung’s impressive filmography, which spans 160 titles.

Bonanza certainly stood out in that list, but there’s no forgetting 1942’s Across the Pacific with Humphrey Bogart. In 1974, in a similar vein as his chef character, Sen Yung mastered cooking and penned The Great Wok Cookbook. One of his other talents included running a Chinese pottery business, which unfortunately actually contributed to his demise. When the pottery kiln broke, Sen Yung passed away on October 31, 1980. He was 65. Rest in peace.

As Candy, viewers got to see David Canary go above and beyond for his employers. But they almost could have missed out on this stellar casting for Bonanza. Drafted in the inaugural 1960 (AFL) draft, Canary almost became a Denver Bronco. However, he loved singing and acting too much and went on to have one of the best character arcs in the show.

After Bonanza, Canary went on to accumulate a staggering 1,211 episodes of All My Children as Adam Chandler and his twin, Stuart. For all his work, Canary won 5 daytime Emmy awards out of a whopping 16 nominations. Canary stayed active in All My Children up until two years before his death on November 16, 2015, at the age of 77.

Similar to Pernell Roberts’ departure creating a gap that needed filling, David Canary parted ways with the Bonanza cast because of a contract dispute. To fill the space, the team recruited Mitch Vogel when he was just 12. He played the orphaned Jamie Hunter who eventually became a Cartwright fully. Don’t let his age fool you, though. Even though he was just 12, he’d already proven himself. Vogel had earned a Golden Globe nomination for the Steve McQueen led film, The Reivers.

After starring in Texas Detour (1978), Vogel took his own detour from acting. Moving to Pittsburgh and formed a band, Vogel got happily married and had two kids. Fast forward to the present day and he’s in his mid-60s living in Southern California, using his acting experience to direct and act in church plays. And yes, his band does still play. He’s one of the remaining Bonanza cast members who remain for us to honor their continuing legacy through this iconic show and beyond.