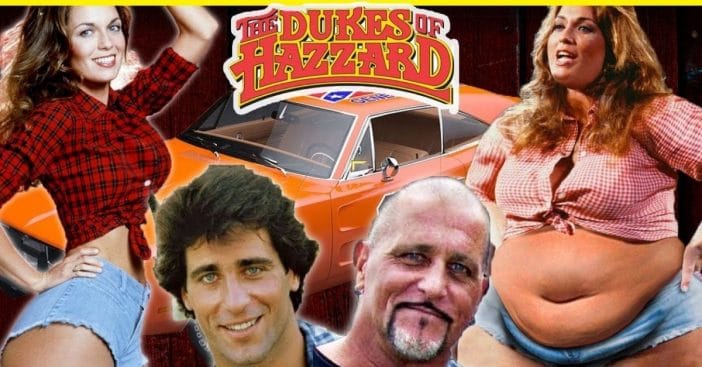 What happens when an army intel officer meets a rugged southern congressman? Well, The Dukes of Hazzard can answer that. This classic action series is responsible for some pop-culture mainstays. From the heroic hood slide— some short shorts that would impact fashion forever— to a car that became the envy of the roads, and the air. It was in the air a lot.

However a lot of little things happened to make the show what it was, and fans may be surprised just how things fell into place or didn’t. Now let’s hop into General Lee and get to the action.

Is the show based on a true story?

This here’s the story of a 12-year-old from North Carolina who decided to start running moonshine. As soon as the kid was old enough, he bought himself a 1958 Chrysler 300D, just the car that could outrun the law. This would become the inspiration for Gy Waldron’s 1975 action flick, Moonrunners.

After Moonrunners‘ release, Waldron’s wheels kept on turning, and The Dukes of Hazzard was formed. This creation came with the help of Cooter himself, Ben Jones, who had a small role in Moonrunners. Jones, in turn, would be the first actor slotted into Dukes. There were some pretty big changes. General Lee doesn’t have a nozzle that ejects oil to ambush pursuing vehicles. And while both renditions featured comedy, Moonrunners was a bit grittier.

However, all of the characters in both are based on real people Waldron grew up with. Waldron doesn’t admit to ever running moonshine, only to drinking it a little bit. Cheers, Gy!

In 1979, Reb Brown was set to star as a live-action Captain America. However, not even Cap’s shield could protect the TV movie from being a huge flop. After that, CBS needed something even more super to fill that void, and fast.

Enter the Duke boys. If you asked CBS’s chairman William Paley, he’d pretty much shoot down any praise for The Dukes of Hazzard. Paley built CBS from radio into one of the Big Three TV networks by recruiting the likes of Lucille Ball and Norman Lear. So, the humor and whole culture around The Dukes of Hazzard were quite foreign to Paley.

Then the Dukes pulled a fast one and sped to a Top 10 series. However, that still didn’t change Paley’s mind. He had no problem slamming the show that was bringing in thousands of viewers to his network. In his words, the show was downright “lousy.”

What does The Dukes of Hazzard have in common with the 40th president, Ronald Reagan? First Lady Nancy, of course. The radiant Catherine Bach’s grade school teacher, Shirley Moore went on to work in the White House. Catherine gifted her old teacher a Daisy Duke poster and Moore informed Bach that she was now the envy of the West Wing, especially with Nancy Reagan. The poster ended up framed, with orders for more to head down to DC.

The Dukes reached other places of government too. For example, Crazy Cooter, played by Ben Jones, went on to become a member of the House of Representatives for Georgia’s 4th District.

Outside of Their Comfort Zones

Beauregard “Bo” Duke, the shoot first, ask questions later type of cowboy. His good looks got him into as many scrabbles as they got him out of, as he sent all the southern belles swooning. But who knew he was played by quintessential New Yorker, John Schneider. Schneider was born and raised in New York until his family moved to Georgia after he turned 14-years-old.

Schneider wasn’t exactly what producers were looking for since they wanted a guy in his 20s or 30s. However, he embodied Bo Duke when he adopted a southern drawl and borrowed a rundown pickup truck for the audition. Additionally, when he walked in with a beer in hand, producers saw him as a scruffy cowboy chewing tobacco. Schneider admits, maybe they didn’t buy it, but they liked it. And with that, plus telling producers he could do his own stunt driving, they’d found their Bo.

Now if that’s hard to believe, just try to imagine Boss Hogg at university, hopefully in his pristine white getup, thriving in academics, and landing a high-stakes intel job. Hogg was known for being a bit slow, but his actor Sorrell Booke was sharp as a tack, thanks to his education at both Yale and Columbia. Additionally, Booke worked as a military intelligence officer during the Korean War.

Anyone who saw Daisy Duke in those shorts pretty much fell in love on sight. So, it’s hard to believe the shorts almost weren’t a part of the show. Producers asked Catherine Bach to pick out a miniskirt like what waitresses at a nearby diner wore. Changing it to a pair of denim short shorts was entirely Bach’s idea— a million-dollar idea.

However, the clothes still hit a roadblock. The shorts were so skimpy, the network was afraid they’d get in trouble with the censors. So, they reached one last compromise: Daisy would have to wear flesh-colored pantyhose under the shorts. And Bach made it work, literally as she was a seamstress and made many of her own outfits, including that red hot bikini from several episodes.

A Star is Born… Again

That famous Dodge Charger was practically a cast member. Well, fans treated it that way! The car itself received 35,000 fan letters a month. And it wasn’t just one car. Not by a long shot. The Dukes of Hazzard used around 200 cars throughout its run, to accommodate the fact that about 1 car per episode got destroyed.

One small problem, Dodge wasn’t making Chargers anymore. So the producers had to film a show and constantly hunt for their next car. That entailed searching, buying, begging, borrowing, and sometimes stealing.

Then of course there’s the famous horn. The horn wasn’t an original part of the car. The directors were eating breakfast in Covington’s town square when a car drove by with that iconic horn blaring. That was enough to convince them the opening bars of “Dixie” had to be in their show. The producers bought the horn from the owner right there for $300. The owner may have lost a horn but gained a heck of a story.

Even legends can be small, and some monster stunts required the tiniest vehicles, producers showed mercy at times to use little toy miniatures of General Lee to save some charge.

Another happy accident: the hood slide. Tom Wopat who made that movie look so smooth admits he didn’t mean for that to happen at all, as his plan to leap over the hood turned into a slide with slick cowboy boots. Furthermore, the car antenna gave him a forever keepsake from the show in the form of a nice scar on his arm.

More Than The Law Will Allow

For all the trouble the Dukes got into, it was usually all in good fun. Unfortunately in 2017, Tom Wopat allegedly assaulted a woman backstage during rehearsal for the play, 42nd Street. There were reports that Wopat was occasionally intoxicated during rehearsals, and police found two small bags of cocaine in his possession.

In 1983, The classic animation studio Hanna-Barbera produced a cartoon called The Dukes. Each episode showed the Dukes on some high-speed adventure around the world. The series only lasted 20 episodes and was created during Season 5 of The Dukes of Hazzard.

Some remnants live on today, different from how fans remember. For example, The Boar’s Nest Bar is now a church. Ace’s Used Car Lot met a similar fate, torn down to expand a different church.

All’s not lost, though! Crazy Cooter, Ben Jones opened his own chain called, Cooter’s Place. With locations in Nashville, Pigeon Ford, and Luray, VA, it sells every kind of Dukes memorabilia you can think of.

And in the early 2000s, you could attend DukesFest, hosted by Ben Jones himself. 25,000 people got to enjoy action-packed stunt driving and plenty of General Lee replicas.

You could call the 2005 The Dukes of Hazzard film “divisive,” but if the 14% score on Rotten Tomatoes is any clue, most people agreed. The film was a stunt gone wrong and many of the actors included the original cast.

The main trio admitted they did like the car stunts, which was a huge part of the original. However, Ben Jones called it flat-out “sleazy.” Jones said, “I don’t know what they were thinking. They totally missed the whole point of the show.” The original Dukes got a lot of praise from parents for giving a fun, entertaining show their kids could watch.

The Dukes of Hazzard may have aired years ago, but it left enough of an impression to still celebrate it today. Who out there has seen every episode of the series? Do you have a particular favorite line or stunt?  Season 3’s “Great Hazzard Hijack” with the epic bridge jump still holds up today! What about that Jessica Simpson reboot attempt in 2005, any fans?