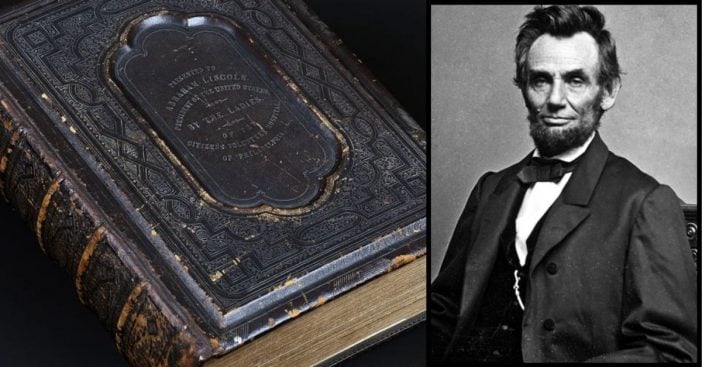 It appears that a Bible that once belonged to President Abraham Lincoln has resurfaced, 150 years later! Experts believe that the Bible belonged to him during a point in time where he was becoming more religious. His religion has been a topic for debate over the years. He is known as the “village atheist.” However, by his second inaugural address, he gives one of the most religious speeches ever by a president.

Experts are now confirming that this find helps solidify Lincoln’s new-found faith in his later years. The Bible will go on display at the Abraham Lincoln Presidential Library and Museum in Springfield, Illinois.

See the photo of this 150-year-old Bible

Reports say that Lincoln receives Bible on June 16, 1864, during a wartime trip to Philadelphia raising money for wounded soldiers. While there, Lincoln donates 48 copies with his name of the Emancipation Proclamation that they were selling for fundraising. He receives the Bible as a gift. It has decorations with the words “faith,” “hope,” and “charity” by the hospital who cares for ill soldiers during the Civil War.

The full cover of the Bible reads, “Presented to Abraham Lincoln, President of the United States, by the Ladies of the Citizens Volunteer Hospital of Philadelphia.”

Reports say the president received another copy of the Bible. He writes in response, “In regard to this Great Book, I have but to say, it is the best gift God has given to man. All the good the Saviour gave to the world was communicated through this book. But for it, we could not know right from wrong. All things most desirable for man’s welfare, here and hereafter, are to be found portrayed in it.”

Mary Lincoln, his widow, allegedly gave the Bible to their neighbor who lived across the street. That neighbor happens to be Rev. Noyes W. Miner, a Baptist minister. He read the book of Job from the Bible at the president’s funeral. Miner was allegedly a very close friend of the Lincoln family.

To further Lincoln’s apparent religious affiliation, Miner says that Lincoln “believed not only in the overwhelming Providence of God, but in the divinity of the Sacred Scriptures.”

Check out some unusual facts about some of the most famous people in history… including Abraham Lincoln!