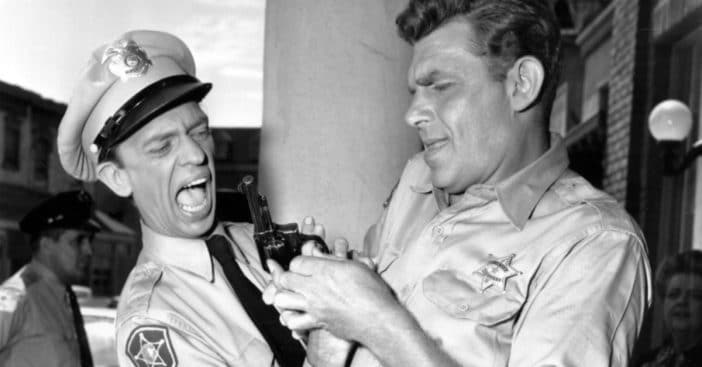 Andy Griffith and Don Knots shared a famous chemistry visible on The Andy Griffith Show right away. That came, in part, from earnest friendship built up over the years. However, when Don Knotts was dying, he didn’t want to be seen – even by his dear friend. So, Griffith channeled Sheriff Andy Taylor.

Very few people actually knew Knotts was so ill. Fewer knew just what he was ill with: cancer. It left him needing an oxygen machine to breathe. As a result, he felt humiliated and didn’t want to be seen in such a state. But Griffith wanted to be there for his colleague and friend.

“Don told almost no one of his illness, lest news should leak to the tabloids,” wrote Andy and Don author and Knotts’ brother-in-law Daniel de Visé in 2015. “Don still wanted to work, and a sick actor could not get work. He didn’t tell his children he was dying. He didn’t tell Andy.”

That illness started as pulmonary fibrosis, a diagnosis he received when he was 80. Even with his lungs gradually increasingly out-of-commission, Knotts continued to work. In fact, he did voice work for 2005’s Chicken Little. He also brought back the role of landlord Ralph Furley from Three’s Company for That ‘70s Show. However, Knotts would learn even more sobering news that he was essentially dying from lung cancer.

It was 2005 when Griffith, Knotts, and their wives enjoyed dinner together. At that dinner, Griffith knew something was wrong. Griffith tried inviting Knotts to a holiday event, only for Knotts to reply, “It’s not a good time; I don’t think I can fit it in.” He received some insight from Knotts’ wife Francey, who “told him that Don was having lung trouble, and that he was reluctant to tell anyone or be seen with his breathing aids.” She did not specify Knotts was dying from cancer, out of respect for his wish for privacy.

However, Griffith wanted to still connect to his dear friend and offer comfort. Just like Knotts had his breathing equipment, Griffith countered, “Look, I have my little scooter that I sometimes drive around the house. I don’t like people to see me on my scooter. I’ll have my scooter, and you’ll have your oxygen.” At this, the two laughed. Then, Griffith assured, “We’re going to get through this.” It’s written that the gesture allowed Knotts to end the talk looking “immeasurably relieved.”