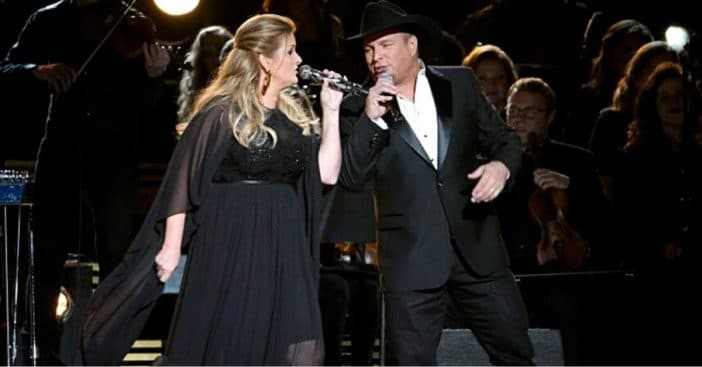 Calling Trisha Yearwood and Garth Brooks a power couple wouldn’t be a stretch, given their musical talent and accolades. Yet, it’s Brooks who consistently bows to Yearwood whenever the two take to the stage together. Brooks explained precisely why during a segment of his Facebook series Inside Studio G.

One fan had noticed the practice Brooks has maintained across numerous performances. In a tweet, they put words to the query, writing, “I was wondering when, where, & how did the bowing towards each other tradition start. I love it, such respect.”

Garth Brooks explains why he always bows to Trisha Yearwood

@garthbrooks @trishayearwood
I have been binging on videos, performances, & interviews all #GarthandTrisha. I was wondering when, where, & how did the bowing towards each other tradition start. I love it, such respect. #ILoveGarthandTrisha #BestCoupleEver #AskGarth

On Facebook, country singer Garth Brooks shares a show he records with SiriusXM via Zoom entitled Inside Studio G. Episodes feature Brooks belting out crooning ballads and giving some insights into his life at a musical and personal level.

When he read one query from Twitter asking why he always bows to wife Yearwood when they’re on stage together, he threw some jokes around. “I don’t know how to say this,” he began. “But but when we first started singing together, she told me I had to [bow]. After every song, I had to bow to her.”

At the time, Brooks delivered this initial answer in a deadpan tone. However, a few things happened to let viewers in on the joke. First, delayed laughter sounded from Brooks. Then, a woman exclaimed off-screen, “I don’t think so!” There’s no official word, but it’s highly suspected that voice belonged to Yearwood. In response to all this, Brooks added, “Oh, yeah, you’re singing with the queen. Then she probably started feeling guilty I was bowing, so she’d bowed back.”

Then he elaborated more on just how this bowing tradition started. “I think it’s just … respect,” he went on. “Long before I thought it was even possible to date the woman, much less marry her, I was the biggest fan of Trisha Yearwood’s voice you can imagine. One of the greatest crimes in country music history right now is that Trisha Yearwood is not in the Country Music Hall of Fame yet. That is a crime, because I can’t tell you how many people have moved to this[town (Nashville] because of this woman’s voice. This is the greatest singer we have in country music, arguably.”

In short, it’s just what he feels compelled to do to show his respect for “the queen.”

Click for next Article
Previous article: The Late Beverly Cleary Wrote ‘Leave It To Beaver’ Books
Next Post: ‘Wheel Of Fortune’ Contestant Speaks Out Following Backlash Over Technicality Rule