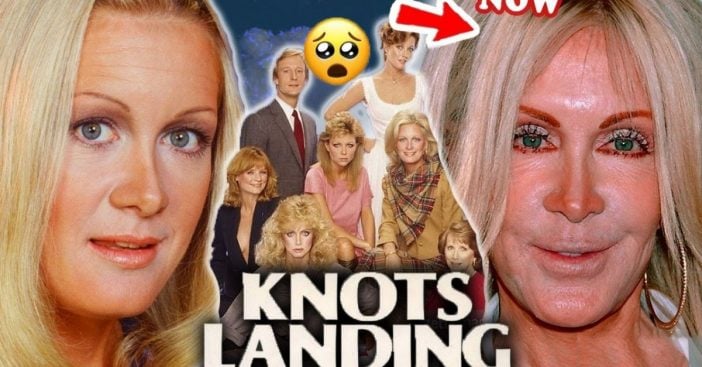 Essentially the next chapter of Dallas, the ‘80s drama Knots Landing centered around the lives of four married couples living on a cul-de-sac. The show, itself, covered it all. From murder to kidnapping and assassinations to drug smuggling, Knots Landing had it all. The show aired from 1979 to 1993, making it the third longest-running primetime drama in U.S. television history. The show’s success proved that it was just as popular as its predecessor, Dallas. This show gained an audience when the era of night-time soaps was waning, making you laugh in one beat while crying at the following scene. Remember Laura’s Funeral?

Nearly two decades later, fans still find themselves feeling nostalgic for the soap opera’s drama and relationships. While many of the show’s actors were introduced at the beginning of their career, they have truly taken off since the first episode of Knots Landing. Let’s take a look at what everyone’s up to today.

Karen MacKenzie is a mother of three and a community activist. After her husband, Sid has the most literal cliffhanger in television history after careening off a cliff, MacKenzie takes over Knots Landing Motors. And when she took off her wedding ring at Sid’s grave, that was Michele Lee’s real-life wedding ring. At the time, Lee was pushing through a divorce from her husband, James Farentino.

Michele Lee began acting in 1961 but her breakout role wouldn’t come until ‘67 with a starring role in How to Succeed in Business Without Really Trying. The following year, she co-starred with Dean Jones in the Disney hit, The Love Bug. Then in 1969, Lee paired with the legendary Dick Van Dyke in the Carl Reiner written and directed film, The Comic.

The fourteenth season of Knots Landing was declared to be the last, but budget cuts were requiring actors to appear in fewer episodes. In response, Michele Lee agreed to work for Union Scale Pay for 4 episodes in order to complete all 344 episodes she was guaranteed for.

Today, Michele Lee is still acting. However, the last sizable role fans saw her the actress in was in the 2004 comedy, Along Came Polly. In this film, Lee played Ben Stiller’s onscreen mother. She is currently in her late 70s and has been married to producer and writer Fred Rappaport since 1987.

Gary Ewing was first introduced to fans in the show Dallas. The second son of oil baron Jock Ewing and always left in J.R.’s shadow, Ewing played the black sheep of the family and a recovering alcoholic. Fans see a lot of drama including Gary and his childhood love/on-and-off wife, Valene. The couple was the tie to Dallas.

Ted Shackelford gained stardom from 1975 to1977 on the daytime soap opera Another World. However, after taking over the role of Gary Ewing from David Ackroyd in 1979, Shackelford moved the role over to Knots Landing and the rest is history.

After moving out of the cul-de-sac, Shackelford was the star of the sci-fi BBC show, Space Precinct in 1994. After that, he featured in the 1997 television reunion movie, Knots Landing: Back to the Cul-de-Sac.

From  2006 until 2015, Ted Shackelford was on television practically everyday on The Young and the Restless for an astounding 385 episodes. Today, he’s in his mid-70s and hasn’t acted since this tenured soap arc.

Valene Ewing, aka Val, had our sympathy for sure. For example, she was met with hardship after hardship, like having her firstborn daughter stolen. Val truly led Knots Landing as well. In 1985, TV Guide said, “‘Knots Landing’ has the grimmest plots but the strongest cast, headed by the incomparable Joan Van Ark.”

Joan began booking television roles in 1967, but she got her Soap Opera feet wet quickly with 17 episodes of Days of Our Lives in 1970. Then in ‘72, Van Ark starred alongside the best, America’s favorite cowboy, Sam Elliott, in the horror flick, Frogs.

From 72’ to ‘74, she was a series regular on the Cleavon Little-led program, The New Temperatures Rising Show. Which also featured Paul Lynde for 20 episodes. In 1979, Joan Van Ark voiced Spiderwoman in the animated series. After Knots Landing ended, she enjoyed more television success highlighted by a 55 episode stint on The Young and the Restless in 2004.

Joan has also participated in 14 marathons and even made the cover of Runner’s World magazine. She’s in her late 70s and has been married to John Marshall, a former NBC reporter, since 1966.

Mackensie, or Mack, is Karen’s second husband and works as an attorney. The two meet after Sid’s killers’ charges were dropped. Although Mack joined the show at the beginning of season 4, he became a vital piece of the drama for the rest of the series. The story with Mack and the abused foster kid became truly powerful and heart-wrenching to watch.

Fans typically remember Kevin Dobson’s early work. He played the young idealistic Detective Bobby Crocker on every episode of Kojak, idealizing the seasoned pro. Telly Savalas became somewhat of an acting mentor and good friend for the rising star Dobson. In 1996 Dobson starred in the first season of the crime drama F/X: The Series and continued acting until his death in 2020.

Dobson passed away at 77 after struggling with an autoimmune deficiency. A former Army soldier, Dobson served twice as chairman of the National Salute To Hospitalized Veterans.

Greg Sumner is the ambitious and hard-nosed politician-turned-corporate titan after inheriting his father’s corporation. Greg was Mack’s old college buddy, and Devane joined the cast of Knots Landing in Season 5 for what was supposed to be an 8 episode guest spot. However, his cast chemistry and fan popularity made Devane a mainstay for the rest of the show’s run.

William Devane began acting in 1967 with his first prominent gig as a lawyer in the 1971 film, McCabe & Mrs. Miller. 1980 offered Devane a more recurring role in From Here to Eternity. Devane also co-starred with Tommy Lee Jones in the 1977 war-based Rolling Thunder, and it’s probably Devane’s greatest film to date.

After Knots Landing, William Devane was part of the Mel Gibson-led action flick Payback in 1999. The 2000s brought him another series regular role as James Heller in 24 and the spinoff mini-series 24: Live Another Day where he played President Heller. Today he’s 82 years old and is also the spokesperson for Rosland Capital.

Abby was the soap vixen and came to town at the start of season 2 to make trouble, playing more than her part in several affairs. Abby set her sights on Gary and toppled that challenge, leading to Val throwing Gary out of the house. Donna Mills was terrific as the villainous charmer and claimed that she did all her own makeup for her character, Abby Ewing. She even released her own eye make-up brand and tutorials, The Eyes Have It, in the 1980s.

Donna Mills got right into the thick of things in 1967, beginning her 6-year stint on Love is a Many Splendored Thing, completing more than 1400 episodes. Later in 1971, her film career took off starring as the girlfriend of Clint Eastwood’s character in the 1971 cult film Play Misty for Me. Clint also directed the picture.

After playing one of the greatest villains in TV history, Mills joined the soap General Hospital for a recurring role as Madeline Reeves and from 2014 to 2018. Today she is 81 years old and enjoys spending time with her adopted daughter Chloe, who has followed her mother into acting, as well as modeling.

One of the juiciest prime-time soap operas in television history, Knots Landing was a hit for many years. From the tighter first few seasons centered on the families to the more outlandish plotlines of greed and desire, Knots Landing was an excellent drama for an incredible 14 seasons.