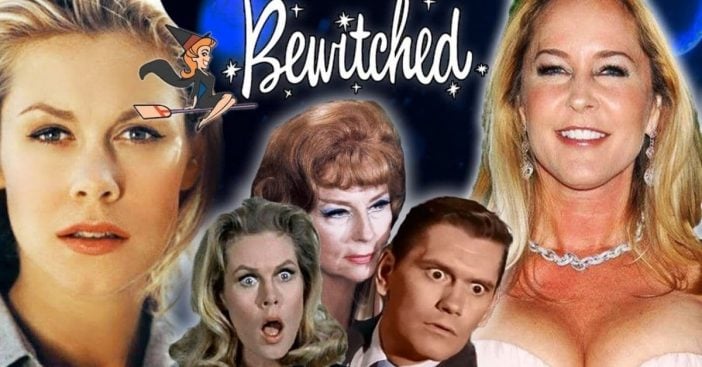 Bewitched originally aired from September 17th, 1964 to March 25th, 1972, and still airs reruns to this day because of its massive popularity. The show revolves around a witch who marries a regular, human man and promises to lead the life of a typical housewife. The show finished as the number two-rated show in America during its debut season and was ranked #50 on Billboard’s “TV Guide’s 50 Greatest TV Shows of All Time.”

Sadly, the cast of main characters have passed on, so we’d like to take this moment to remember the show and the characters that made it so enjoyable for all of us. Learn where the cast went after Bewitched here.

Samantha Stephens really was magical. She had to be, to best balance domestic life and learning to live a whole new way. All this had to happen under the disapproving eyes of her mother Endora. With Elizabeth Montgomery at the healm, Samantha became a new type of female TV hero: finally, women were respectfully depicted as stars capable of more than society allowed. Thanks to her own nervous habits, she even helped solidify Samantha’s iconic nose twitch!

Even though it made her a household name, Montgomery wanted to prove herself as more than that quirky witch from the magic show. She came from entertainment royalty, after all. Her mother was Broadway actress Elizabeth Allen and her career began through her father Robert’s 1950s series Robert Montgomery Presents.

Eventually, she also took on roles with much darker subject matter. Perhaps the darkest of these came while she was locked in a contract with ABC and acted in 1974’s A Case of Rape, which brought sexual assault to the forefront of people’s attention maybe women didn’t have to suffer in silence. And while Montgomery was known for her leading role in the show Bewitched, she also played leading roles in other movies such as The Legend of Lizzie Borden (1975) and Deadline for Murder: From the Files of Edna Buchanan (1995). She continued acting in TV movies and series and was just as active in her private life when she fought for equal marriage rights and raised awareness of the AIDS problem. She actually continued battling for others and battled colon cancer until her death from cancer in 1995.

Darrin Stephens, ever high-strung and stubborn, down-to-earth even, didn’t know what he was getting into when he fell in love with Samantha Stephens. Even if he pushed the bonuses of living life without magic, becoming a witch’s husband can be a rollercoaster. Through it all, he had to face the ominous ire of his new mother-in-law, Endora.

There are not many photos of Dick York in his final years as he passed away quite young, but we remember him as Darrin Stephens on Bewitched from seasons 1 to 5. Most of York’s acting career took place long before he even starred in Bewitched, in TV series like Studio One in Hollywood (1956-1958) and The Millionaire (1958-1960). He got his start when a Chicago nun saw his vocal potential. As a result, he could bring a lot of experience to his roles. That is, if he could bring himself to the set. Back in 1959, York was shooting the movie Condura. There, he experienced a major back injury. It never really went away, so he barely made it to set – and even auditions – for Bewitched. Eventually, he and the show had to part ways.

By that point, York fell into a bad place. He’d become bedridden for 18 months. Eventually, he became flat-out broke while suffering from emphysema. Quitting all his addictive substances cold turkey, he tried an ’80s comeback through Fantasy Island. The last role he held was in the TV movie High School U.S.A. in 1984. Even though he didn’t fully get his comeback, he founded Acting for Life, a private charity to help the homeless. He passed away in 1992 after battling emphysema for years.

After Dick York left Bewitched, Dick Sargent played the role of Darrin Stephens from season 6 to 8. Audiences could see the difference even without visuals; Sargent played a slightly different Darrin than his predecessor. His would be a bit more calm, less indignant. He justified this by equating one season to one year of marriage; by the time he joined, surely Darrin would be just a bit used to Samantha’s antics by now. Elizabeth Montgomery supported his interpretation while Agnes Moorehead, in character as Endora, did not. Audiences apparently agreed because the show’s rating dropped 13 places.

He had a very long acting career both before and after Bewitched. He was on The Loretta Young Show in 1959 and also on the TV series One Happy Family in 1961. After Bewitched, he was in the TV series Taxi in 1982 and plenty others, including his final role in the film Acting on Impulse in 1993. His fame and career made him a desirable guest star for Dukes of Hazzard and The Waltons. One of his longest-running roles came from 93 episodes of Down to Earth, which he acted in right until he passed away in 1994 after a long battle with prostate cancer.

Dear mother Endora proved love conquers all – by always trying to thwart it between her magically gifted witch daughter and her mere mortal husband What’s-His-Name Derwood. Deep down, though, Endora clearly cared, because she actually threatened a warlock over Darrin’s wellbeing.

Agnes Moorehead played the role of Endora on the show. All this is thanks to a shopping trip when Elizabeth Montgomery and series director Bill Asher saw her at Bloomingdales. She was born in the year 1900 but got her start in acting in 1941 with the role of Mary Kane in the film Citizen Kane. Not only did she have a successful film career, but she also dabbled in radio, stage, and television. She was also in one of the episodes for The Twilight Zone!

She’s one of those special actors who may not be the lead but can easily steal the show, so it’s no wonder she became the first woman to co-host the Oscars, pairing with Dick Powell in 1948. She continued working up until her death in 1974 with her final role in the TV movie Rex Harrison Presents Stories of Love.

Larry Tate is probably in the dictionary as the quintessential – if over-the-top – definition of a businessman. He’ll say whatever the client wants to hear as long as they can secure a deal. Sometimes, he changes his opinion completely from one sentence to the next. For all that, though, he was very important since he provided a reliable friend for Darrin and was part of the one place Darrin felt a bit in control.

David White played the role of Larry Tate, who was a recurring character from seasons 1 through 5, and a starring character in seasons 6 through 8. He appeared in shows like Peter Gunn, The Untouchables, Mission: Impossible, and Bonanza, just to name a few big ones. He also appeared in two Twilight Zone episodes. He wasn’t just in shows, though; he played a philandering executive in 1960’s The Apartment. Even though he became known for his “quicksilver” comedic timing, he also landed a role in another favorite: Dynasty. His final role was in a short in 1989 called Mergers & Acquisitions. He passed away in 1990 of a heart attack.

Even though he only appeared in a few episodes, Uncle Arthur became a fast fan favorite. Who doesn’t love a practical jokester? His love for humor made him an excellent foil for the snooty, cranky Endora and gave Darrin, even more, to contend with right in his own home. Uncle Arthur represented the audience as gifted with magic.

Actor Paul Lynde, thus, represented Arthur and a whole lot of his fans, even if they didn’t know it. This king of comedy became a middle square in The Hollywood Squares, which granted him co-star billing along with host Peter Marshall. All this show-biz fame was almost what he wanted. Almost. Deep down, he hid a lot of insecurities from his weight to his homosexuality. He constantly chased dreams of film stardom right to his death at just 55.

Due to popular demand… we are adding Erin Murphy as Tabitha Stephens!

When Elizabeth Montgomery became pregnant, the show added in a child for the Stephens family. That child became adorable blonde Tabitha, a half-witch. Five different babies played Tabitha during season 2 but by season three, it was just Erin Murphy and her twin Diane. Then, a season later, Erin became the main actress behind Tabitha.

Murphy was just a little one when she appeared on the show as Tabitha Stephens. She and her twin beat Helen Hunt and Jodie Foster in competition for the role. She is best known for her role in Bewitched, but has also appeared in other TV movies and series as well such as Lassie in 1973, The Comeback Kids from 2014-2015, and most recently in TV Therapy (2019) as her character, Tabitha! Outside of TV, she also appeared in over 80 commercials, including a detergent ad with Ronald Reagan. She is 57 years old today, one of the very few individuals involved in Bewitched still alive in 2020.

All of us at DYR are pleased to share a wonderful photo from the Facebook page by one of our fans, Malia Griffin. “We have a Samantha Stephens Statue in my hometown of Salem, MA where a few Bewitched episodes were filmed back in the day,” she says. Check this out!

Thanks again for the awesome photo, Malia!

Do you remember all these familiar faces from Bewitched? Be sure to SHARE this article with your friends and family if you do! Who was your favorite character from the show? Did we forget anyone you loved from the cast? Let us know in the comments, we read every one!

Check out this promotional video for the show from the early 1970s: