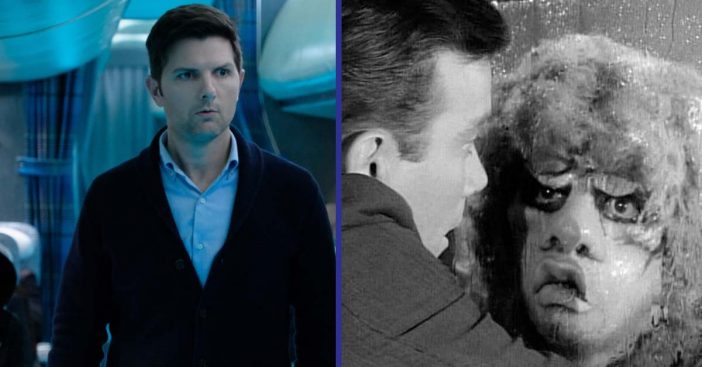 As many are aware by now, a revival of The Twilight Zone with host Jordan Peele has been long-awaited as many trailers and sneak peeks have been broadcasted worldwide. Now, the moment we have all been waiting for has finally come, and it has come with a classic episode from the original series, called “Nightmare at 30,000 Feet.”

The original, being called “Nightmare at 20,000 Feet,” aired in 1963. The story follows an anxiety-ridden passenger who swears he sees some sort of gremlin outside on the wing of the plane. When he tries to tell his wife and flight attendants, they don’t see anything and he starts to go crazy.

This new take on an old classic doesn’t really aim to redo or remake the original to a perfect ‘T’. There’s no gremlins or other weird creatures on the wing of the plane, but rather an anxiety-ridden man who’s trying to save everyone on the plane from a destructive fate and no one else has any clue what’s going on except for him.

Sounds very familiar to the original plot. Just without the gremlins.

Justin Sanderson, a PTSD-suffering journalist, has taken a job at Tel Aviv, which is where his flight is now headed. He has a podcast handy to keep himself entertained while on the flight, which is about “The Mystery of Northern Goldstar Flight 1015,” which was about a plane that just vanished in thin air right out of the sky.

The problem? Justin is on Northern Goldstar Flight 1015. With all the evidence that this podcast provides Justin on the eventual fate he and his passengers will face, it’s no secret as to why he’d grow increasingly more and more anxious.

Vulture describes a recap of the end of the episode, which apparently just doesn’t do justice to how strong the episode allegedly starts off. “And the final scene, in which the surviving passengers take their frustrations out on Justin, just feels cheap, a rimshot that breaks with the tone of the rest of the episode. If he’d been portrayed as a pest who deserved that sort of punishment, it might have worked,” Vulture explains.

“Instead, it’s a gag that doesn’t land, a weird coda that makes light of a protagonist whose fate we’re supposed to care about elsewhere. Sure, it gives a punchline to Justin’s concerns about the end of civility, but it plays like a twist too far in an otherwise solid outing.”

Will you be turning in to watch the revival of The Twilight Zone? Be sure to SHARE this article to let your friends know about this classic episode, which can be viewed on CBS All Access right now!

Watch it Here For Free (Today Only)

And a scene from the Original

Previous article: See This Dad’s Reaction After Going To Costco For The First Time
Next Post: Breaking: ‘Dog The Bounty Hunter’ Star Beth Chapman Rushed to the Hospital